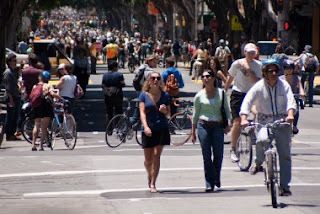 On 1/23/12, one of BikeWalkLee's national partners, the Alliance for Biking & Walking, released a new report, Bicycling and walking in the United States: 2012 Benchmarking Report, which ranks all 50 states and the 51 largest U.S. cities on bicycling and walking levels, safety, funding, and other factors. Below are excerpts from their press release.

This report shows that increasing bicycling and walking are goals that are clearly in the public interest.

As this report indicates, many states and cities are making progress toward promoting safe access for bicyclists and pedestrians, but much more remains to be done.

Making the Case for Increased Investment in Bicycling and Walking

As this report shows, the United States overall has great disparities between bicycling and walking mode share, safety, and funding. Twelve percent of trips are by bicycle or foot, yet bicyclists and pedestrians make up 14% of traffic fatalities and receive just 1.6% of federal transportation dollars.

An international comparison of bicycle funding and mode share by Gotschi and Mills and the Rails-to-Trails Conservancy (see Chapter 4, page 96) demonstrates that international cities that invest greater amounts per capita in bicycling have greater levels of bicycling. These cities provide strong evidence that in order to increase bicycling and walking, the United States must invest significantly more in these modes.

Looking Outside Our Borders

The Economic Impact of Bicycling and Walking

As economic recession has impacted communities across the nation, active transportation has emerged as a promising sector for growth and revitalization. Bicycling and walking projects create 11-14 jobs per $1 million spent, compared to just 7 jobs created per $1 million spent on highway projects. A series of case studies in 2010, examining the construction of U.S. bicycle and pedestrian facilities, found that such projects created between 218 and 1,050 new construction jobs.

After an initial economic boost from construction, pedestrian and bicycle infrastructure has a lasting impact on local economies. A 2009 study in Minnesota found that bicyclists on state trails spend $2.4 billion annually, supporting nearly 31,000 full- and part-time jobs. A survey of San Francisco business owners on Valencia Street found that two-thirds of merchants thought the street's bike lanes had an overall positive impact on their business or sales.

Bicycling and walking also results in significant cost savings on health care spending. If just one out of every 10 adults started a regular walking program, the U.S. could save $5.6 billion in health care costs — enough to pay the college tuition of more than 1 million students. Thanks to bicycle infrastructure and programming, the City of Portland expects to see between $388 and $594 million in health savings by 2040. Cost benefit analysis show that as much as $11.80 in benefits can be gained from every $1 invested in bicycling and walking.

This report highlights numerous measures to promote bicycling and walking. As Chapter 7 discusses, a variety of policy measures and provisions are likely needed to make communities more bicycle- and pedestrian-friendly.

More than one-third of the U.S. population is under age 16 (typically cannot legally drive) or over age 65. Streets that do not adequately accommodate bicyclists and pedestrians create barriers for people who do not drive. This limits their ability to fully participate in American society, or else makes them reliant on others to drive them around. Less than half of states and major U.S. cities have adopted complete streets policies, which require that roadways be designed and built with all users in mind. In the absence of a national complete streets policy, the Alliance encourages states and jurisdictions to pursue local policies to begin to transform their local transportation culture and guarantee access for all road users.

Other policies featured in this report, such as education for police officers and the inclusion of bicycling and walking safety in driver education, are also key to the shift toward a bicycle- and pedestrian-friendly culture. Adult and youth education programs, public awareness campaigns such as "Share the Road," and other promotional efforts, can also help raise awareness and change attitudes around bicycling and walking. Many of the benchmarks featured in this report contribute to making communities more bicycle- and pedestrian-friendly by changing the built environment, culture, attitudes, and behaviors.