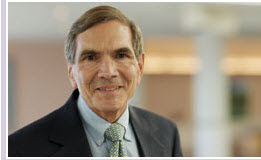 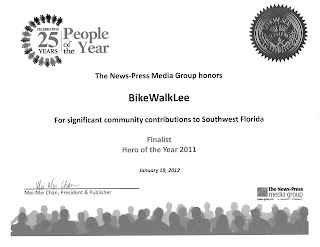 Congratulations to Jim Nathan, president and CEO of Lee Memorial Health System (LMHS), who was named Person of Distinction for the Past 25 Years at Thursday's News-Press awards event. For the past 25 years, Jim Nathan a leader and role model on living a healthy and active lifestyle and the need for a safe and accessible built environment that encouraged people to exercise. He was a champion for complete streets before the term was coined! He and his organization, LMHS, were a founding supporter organization of the BikeWalkLee coalition and at every step of the way, Jim has shown his support through commentaries, testimony, letters of support, and action. Thank you, Jim, for all you've done for the community and your contributions to the complete streets movement in Lee County.

BikeWalkLee was honored to be a finalist for the Hero of the Year award and BWL representatives Darla Letourneau, Dan Moser, Ann Pierce, and Cindy Banyai, participated in the awards event. Congratulations to Meg Geltner of the Salvation Army, who was named Hero of the Year. It was truly an inspiring event and being with all the award winners from the past 25 years was a reminder of how many residents and groups in our community have contributed their time, talent and experience to moving Lee County toward a more productive future. Thanks to News-Press for hosting this event and for honoring our community leaders.
Posted by Darla at 1/21/2012 04:17:00 AM