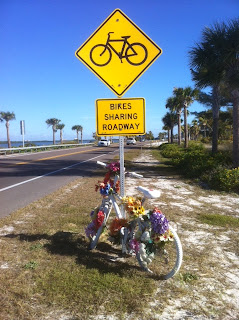 News-Press reporter looks into why FHP hasn't completed its investigation or brought charges against the driver who killed Tracey Kleinpell while cycling on the Sanibel bridge 8 months ago.  BikeWalkLee representative is quoted in the story.

It’s been eight months since 46-year-old Tracey Kleinpell was killed after being struck by a truck while bicycling on the Sanibel Causeway, but her family is waiting on law enforcement to determine if charges will be filed in her death.

Kleinpell, of Fort Myers, was riding on the shoulder of the causeway with her husband Gordon toward Sanibel Island when she was struck by a truck traveling in the opposite direction.The impact sent Kleinpell over the waist-high guardrail and into San Carlos Bay.

Passing boaters pulled her out of the water and brought her to shore, where she was pronounced dead after attempts to resuscitate her.

The driver of the truck, Theresa L. Shirley, 46, of Bokeelia, was traveling north when she veered across the road and struck Kleinpell, according to a Florida Highway Patrol report completed on May 7, the day of the crash. Shirley was not injured. She wasn’t cited at the time of the crash.
Florida Highway Patrol spokesman Lt. Gregory Bueno said there is an open homicide investigation into the crash, but he declined to provide information on a timetable as to when or if charges will be filed. He said an official crash report has not yet been released, because of the open investigation into the death.

When asked on Jan. 17 about the status of the investigation, Bueno said the FHP is waiting on the Florida Department of Law Enforcement to return toxicology results from a report that was submitted to the agency after the crash. But FDLE spokeswoman Kristi Gordon said on Jan. 20 her agency received a toxicology report request from the FHP, and it was completed by FDLE and returned. On Jan. 23, Bueno said there was a second request sent to FDLE that has not yet been completed.

Last week, Gordon said a second request was submitted to FDLE in November, but the FHP was notified FDLE didn’t perform the type of test requested, and on Thursday, Bueno confirmed FHP has received information from FDLE and is continuing with the investigation.
Reviewing case
Investigators are reviewing the case along with the state attorney’s office, he said.
Bueno and Gordon declined to give details as to the results of the tests, what types of tests were requested and when the reports were requested and completed.

Darla Letourneau with BikeWalkLee, a community group geared toward raising public awareness about safe travel on streets in the county, said people want to make sure law enforcement is following through on the case.

“I want to know if they did their job,” she said, noting eight months seems sufficient time to conduct the investigation into Kleinpell’s death. “The law should be enforced, and there should be consequences just like if it was a person killed in a car crash.”

“I think she should be charged with something,” he said. “We need to find out what happened.”
He said he and his wife Donna struggle with their daughter’s death every day, and he’s not sure anything can lessen the pain of their loss.

“I don’t think we’ll ever have closure,” he said. “It’s hard, because there are just things that come up that remind us of Tracey. We just miss her so much.”

Donna Henault said the family has never had contact with Shirley.
“I’ve never seen her, and I pray to God I never meet her,” she said through tears. “It’s just unacceptable that woman is walking around, and our baby isn’t. She needs justice.”
She said the months of waiting for news on the investigation have had a toll on her and her husband physically and emotionally, and she’s beginning to lose faith law enforcement will file charges in the case.

“We are trying to heal, and we can’t with this hanging out there like this,” she said.
Shirley could not be reached for comment Friday.
Kleinpell was one of five bicyclists killed in Lee County in 2011, up from four in 2010. There were five deaths in 2009.

The four other deaths were also investigated by the FHP, which indicated in news reports those four bicyclists were at fault in those crashes.

Other bicyclists killed in Lee County in 2011
• Janet Lofranco, 59, was killed Feb. 19 when she was struck by a vehicle while trying to cross the intersection of Estero Parkway and Three Oaks Parkway.
• Kenneth Grant MacDonald, 50, was killed on April 17 in Estero when he was struck by a vehicle while trying to cross U.S. 41.
• Kellie Geiger, 52, was killed on May 7 after being struck by a vehicle on U.S. 41 in Bonita Springs. Geiger traveled in the path of a vehicle heading south on U.S. 41. The driver in that crash, 22-year-old Rachel L. Ryan, was charged with driving while her license was suspended and possession of suspended license, according to the FHP.
• An unidentified man was killed on May 27 after crossing in front of a vehicle on Tice Street near Lexington Avenue in Fort Myers.
Related Links