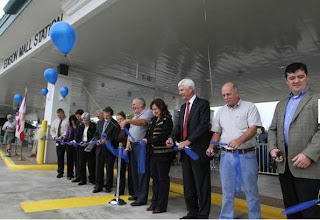 Kudos to LeeTran, the County Commissioners, FDOT, City of Fort Myers, and the Edison Mall management for working together over the past several years to finally bring this much needed and long-awaited new transit facility at Edison Mall.

After years of planning and months of construction, the Lee County Transit Edison Mall station is open for business.

The new facility, which serves as a major transfer point for the bus system, has an eight-bay station with covered seating, a passenger restroom and is WiFi-enabled.

LeeTran held a ceremony Wednesday to celebrate the opening of the station, which has been in service since Jan. 3.

“It’s better than standing out here with not enough seats, and now everyone has a place to sit,” said Raymond Ramos, who goes through the Edison stop every day to get to school. “Not as many people will be out in the open and exposed to the weather.”

The project cost $1.25 million, and construction lasted about seven months. Fifty percent of the funding for the project came from a state grant, the other half from the county.

Joann Haley, marketing manager for LeeTran, said the new facility will better serve the patrons who travel through the stop on a daily basis. The Edison station is the busiest in the county; it services eight routes and sees more than 100 bus trips per day. About 250,000 of the estimated 3.2 million riders who use LeeTran every year travel through the facility.

The old bus stop only had three shelters that could accommodate fewer than a dozen people, exposing others to the elements while http://www.blogger.com/img/blank.gifthey waited for buses. There also were no bathroom facilities. The new facility has 64 seats and can accommodate about 130.

Mall manager Robert Edelen said he expects the new facility to benefit Edison and give customers using the bus system a better experience.