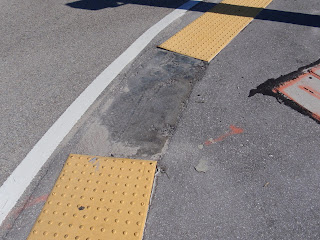 If you're cycling on Lee County roads and paths, watch for the above-pictured problem at intersections. Nearly every intersection where this style of pad is being used is coming up and creating a very dangerous situation at very busy intersections. There are tire popping screws sticking out of them and may are loose. This has been reported to the DOT, they agree they are a problem, they have not given me any information of fixing them and as of yesterday none reported are fixed.