BikeWalkLee is excited about the cutting-edge "Blue Zones" project coming to Collier County and South Lee.  This is a major long-term initiative that uses scientific research to help communities boost their well-being.  Blue Zone projects have been successfully implemented in 13 communities across the country and in every instance, it's proven to improve the well-being of participating communities. A key focus of these projects is permanent change in the environment, i.e., the built environment--roads, sidewalks, biking facilities, parks, buildings, etc. It's also a model community-wide collaboration with a broad spectrum of  partners and community groups.

BikeWalkLee's Margaret Banyan, Ann Pierce, and Darla Letourneau, along with representatives from the Naples Pathways Coalition, attended the Oct. 24th kick-off event, and will also participate in this week's community assessment process.  Click here to learn more about the Collier County project. Below is the Oct. 25th Naples Daily News article about the kick-off event, along with our photos from the event. 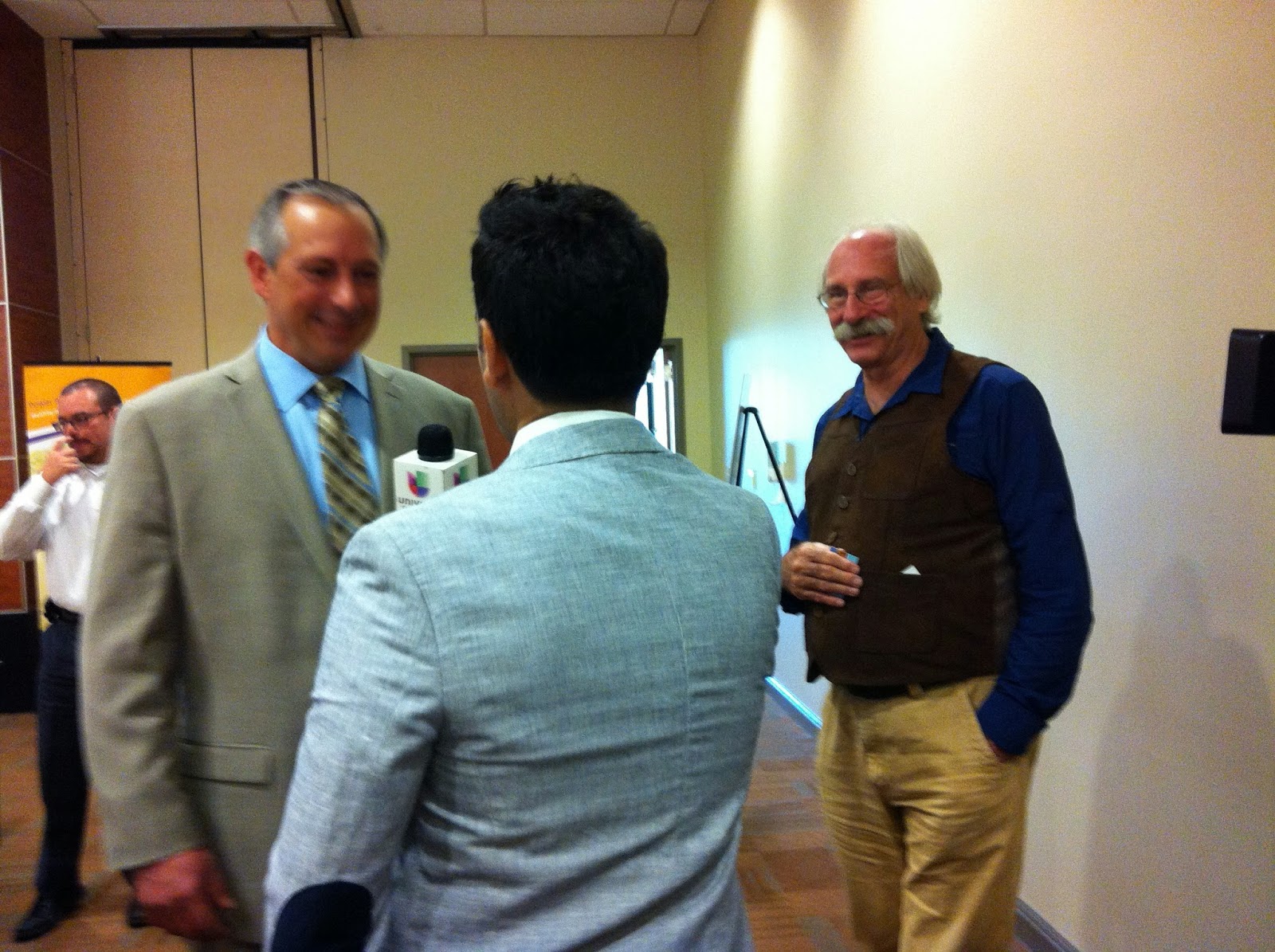 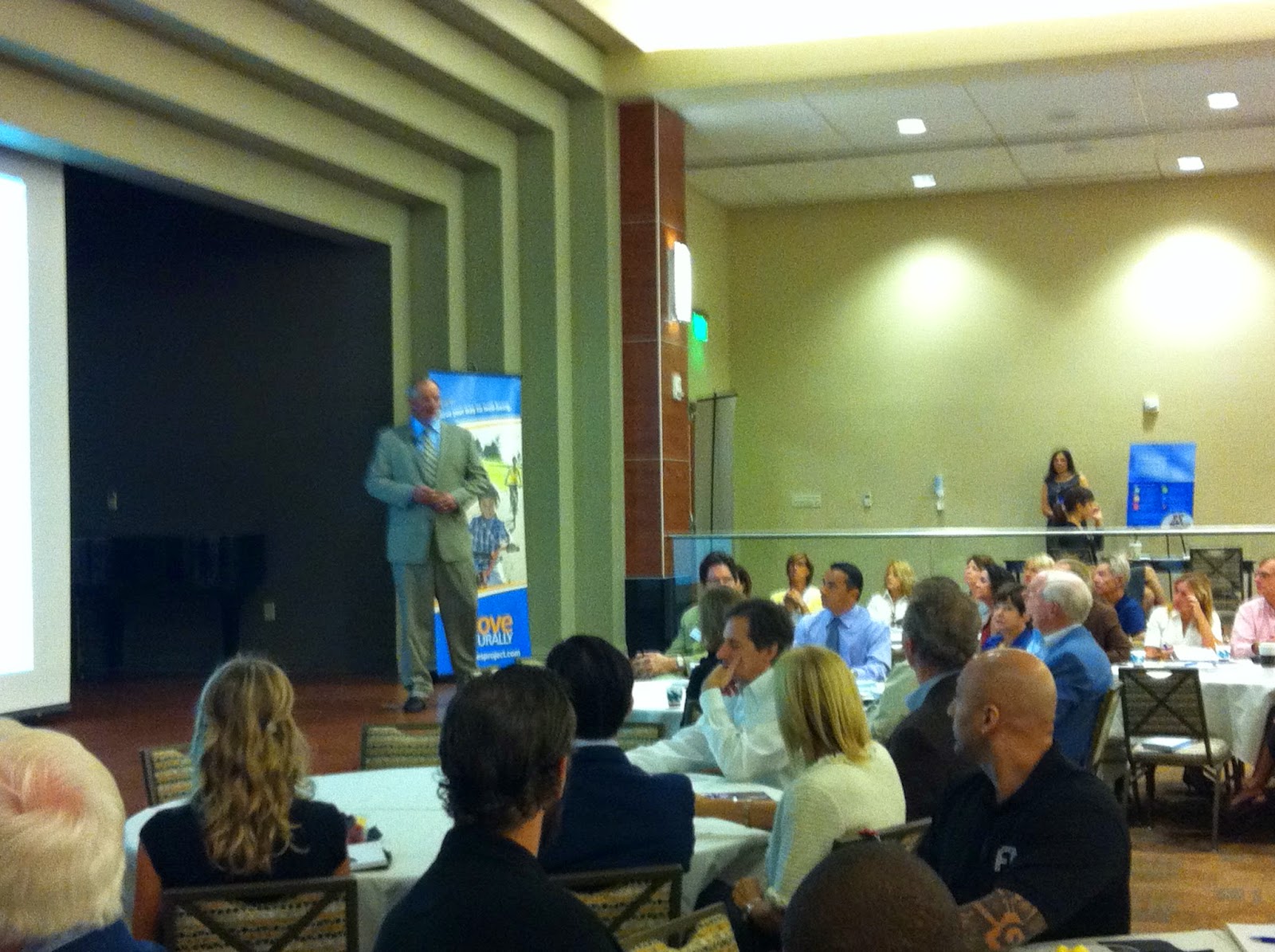 NAPLES, Fla. - A 10-member team from the Blue Zones Project will spend the next two weeks in Southwest Florida assessing the community’s lifestyle environment to help local residents live healthier and have more fulfilling lives.

The NCH Healthcare System announced Friday the launch of a Blue Zone initiative for Collier and south Lee County, spearheaded by NCH president and chief executive officer, Dr. Allen Weiss. The Blue Zones Project is a Minneapolis-based organization that helps communities transform residents’ lives to be healthier, happier and more connected to one another.

“We can change our culture, we are poised to do it,” Weiss said Friday to 125 local leaders at a breakfast on the campus of the NCH Downtown Naples Hospital to announce the initiative.

The Blue Zones project was launched after National Geographic’s explorer Dan Buettner looked at communities worldwide where people live longer and wanted to know why. He found nine “power principles” that included communities where people are moving naturally in walkable neighborhoods, eat wisely, limit alcohol intake, have time to down shift for meditating or napping, put family first and belong in some way to a faith-based community.

Photo gallery: The Blue Zones Project to assess Naples
Weiss has been advocating the merits of the Blue Zone lifestyle over the past year and has been nudging elected, civic and business leaders to get on board with it. NCH sees the project as a 10-year initiative.

Tony Buettner, vice president of product and business development for the project, presented Friday an overview of how the project came into being after his brother examined longevity in Sardinia, Italy and Okiniwa, Japan, where the focus is on friends, family and downshifting.
“People with higher well-being cost less and are more productive,” he said. “How do we raise well-being? It’s all about evidence-based choices.”

The Blue Zones group partnered with Healthways, a Nashville, Tennessee-based company that provides support to companies and government entities to make behavioral changes.

Albert Lea, Minnesota, was the first pilot Blue Zone project in the United States. The city added walkways and bike paths, and put healthier foods in schools and grocery stores, among numerous other changes.

The result, in terms of one measurement, has been a 49-percent decrease in city workers’ medical claims, Buettner said. More school children walk to school there and it is now safer for them to do so, he said.

The governor of Iowa in 2011 launched a statewide initiative for Iowa to be a Blue Zone. The city of Spencer was an early participant and now 58 percent of residents exercise regularly and 13 local companies have become Blue Zone worksites.

For a project to work, there must be a commitment to change among community policy-makers, schools, restaurants, grocery stores, work sites, the media, and philanthropic groups, he said.

During the assessment in Collier, Buettner said his team will be looking at each sector locally, in part to determine the challenges.

“Is there buy in? Do they want to do the work?” he said, adding that being a Blue Zone community takes hard work and engagement.

Community leaders left the kick-off event enthused. Some pointed out that the city of Naples, with its emphasis on walkable neighborhoods near downtown and bicycle paths, has a jump start.

“If we start in the city and prove what we have done in the city, it may affect (others) in the county,” said Alan Ryker, who co-founded the Naples Pathways Coalition Inc. several years ago to promote bike paths and sidewalks. “I’m excited about the fact that we are thinking about it.”

Collier County manager Leo Ochs said the county can make policy decisions that help and some decisions, such as putting in bike paths and sidewalks, and promoting bicycling safety, dovetail into Blue Zone principles. The county has $250,000 a year budgeted for sidewalks and bike paths, according to county staff.

“Those are all compliment tie-ins to some of the concepts we heard,” he said.

Stephanie Vick, administrator of the Florida Department of Health in Collier said many groups have been working on various projects to promote better health for years. The Blue Zones project will provide a strong focus and collaboration, Vick said.

“The synergy of all of us working together is exciting,” she said.