News-Press continued its focus on bike/ped safety with another front page feature story on Sunday, focusing on the rash of recent bicycle crashes that are pushing leaders to act.  The article includes quotes from both Steve Chupack and Dan Moser of BikeWalkLee, along with many other stakeholders. News-Press, Sunday Oct. 12, 2014  By Cristela Guerra, cguerra@news-press.com 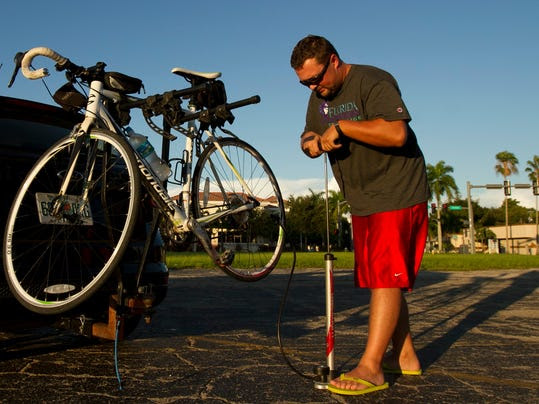 (Photo: LINDSAY TERRY/THE NEWS-PRESS )
There are too many invisible bikes across Southwest Florida, too many people injured in transport while riding for recreation, running errands or on their usual route to schools.

These memorials known as ghost bikes are hard to miss. Drivers can see them on the Sanibel Causeway and in Cape Coral neighborhoods. Each one represents a life cut short.

The most recent memorial was chained up at the intersection of Kismet Parkway and NW 7th Avenue in the Cape in remembrance of 15-year-old Austin Dukette. He died in August from injuries suffered in a collision with a Lee County deputy. There were other bike memorials throughout Lee County, though some have been removed due to driver complaints. 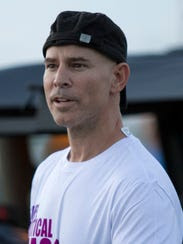 Community leaders are calling for a culture change. A clan of experts united in downtown Fort Myers on Oct. 1. On the second floor of The Veranda restaurant, familiar faces from the state attorney's office, medical professionals, law enforcement, bike safety activists and injury prevention specialists gathered in discussion with communications representatives.

Rather than polarizing the issue by laying blame on motorists or cyclists, those around the table discussed how to bring people together. In its preliminary stages, this could take the form of a public service announcement or media campaign that acts as a call to action. It's their urgent desire to make people realize the number of crashes in the region is increasing. It's just getting worse.

"It's a quality of life issue," said Steve Chupack, a volunteer with BikeWalkLee and Cape Coral Bike-Ped. "But something can come out of tragedy…an opportunity to get people to think about being responsible for each other."

FACEBOOK
Share the Road Florida
More than "look both ways before crossing the street" and "don't text and drive," it's about making people aware of their surroundings and mindful of their neighbors. To date, at least 22 pedestrians and bicyclists have lost their lives in Lee County this year. But there are far more collisions that don't result in a fatality that often go unnoticed. So far in 2014, an estimated 125 people have been injured while on a bicycle in Lee County and 144 pedestrians have been injured in motor-vehicle related accidents, according to preliminary data from Lee County Metropolitan Planning Organization. The 13-year high was 2013 with 175 injuries.

"They want to be part of the solution," Moser said. "I came away from that meeting with a good feeling, that there is going to be a different approach instead of the same old message. The culture change has to be that everyone using the right-of-way and the roadway realizes there's a risk involved. You've got to be paying attention."

There is just under $34 million set aside over the next five years for bicycle-pedestrian facilities such as paths and bus shelters in Lee County alone, said Brian Raimondo, senior planner with the MPO.
"I think everybody, all people need to follow the rules of the road," said Syndi Bultman, injury prevention manager at Lee Memorial Trauma Center. "It's not just about me, me, me…you need to keep your eyes on the road and hands on the wheel."

In Naples, attorney Jeffrey Michelland and competitive cyclist Tish Kelly are working on a project to try to get more laws to protect cyclists, pedestrians, and other vulnerable users of the roadways. Kelly said she just wants to ride in peace with her friends.

"Our efforts will be in promoting greater public awareness of the legal responsibilities and rights of both motorists and cyclists," Kelly said in a statement. "We will make efforts to ensure that law enforcement officers are educated in the importance of ticketing motorists and cyclists appropriately for violations of the state traffic laws."

"Kelly said the Collier County Board of County Commissioners agreed with their legislative suggestions on bicycle safety when presented last Tuesday, Oct. 7. These include new laws, improved ones and stiffer penalties. She said their suggestions have been placed on the legislative agenda as a priority." 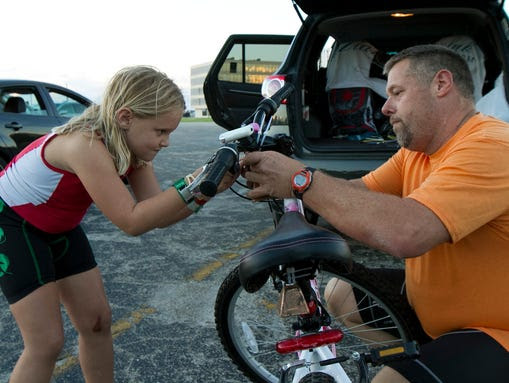 Molly Flynn, 7, works on putting a cowbell onto her handlebars with her dad Michael in downtown Fort Myers on Friday night, Oct. 3. (Photo: LINDSAY TERRY/THE NEWS-PRESS )

Cape Coral Bike-Ped is looking at a scope of work for a bike and pedestrian plan for the city. The organization has already worked with the city to create a number of interconnecting bike and pedestrian routes. Changes are happening, albeit slowly. On the first Friday of this month, cyclists with SWFL Critical Mass drove up in cars to an empty lot off McGregor Boulevard and began unloading bikes for their monthly group ride. Julia Kroeker and her husband, Dan, pumped their tires. On his arm is a bracelet with emergency information in case of a bad collision.

SHARE THE ROAD
Join the discussion and like our special Facebook page called Share the Road and share your thoughts, opinions and observations about cycling and road safety in Southwest Florida. Go to facebook.com/sharetheroadflorida. For resources, data and more information, go to capecoralbikeped.org, bikewalklee.org and leempo.com