As reported in the October National Complete Streets Coalition Newsletter, USDOT announced a major street safety initiative on Sept. 10th. Transportation Secretary Anthony Foxx called it "the most innovative, forward-leaning" initiative "ever", the department will be working toward safer places and safer policies for people on foot and bike, just as they do for people in cars, trucks, and airplanes. The initiative is heavy on changing the way we design our streets—the most important factor for improved safety—from start to finish. With new, research-based design guidance, partnerships with local, state, and national transportation staff and public interest groups, and a focus on interconnected networks, we expect big results.  Click here for the USDOT Action Plan: Safer People, Safer Streets, Sept. 2014

Below is the USDOT press release:

DOT 81-14
PITTSBURGH – U.S. Transportation Secretary Anthony Foxx today announced a new initiative to reduce the growing number of pedestrian and bicyclist injuries and fatalities through a comprehensive approach that addresses infrastructure safety, education, vehicle safety and data collection.  The 18-month campaign will begin with road safety assessments conducted by U.S. Department of Transportation field offices in every state, and will produce multiple resources to help communities build streets that are safer for people walking, bicycling, and taking public transportation. Secretary Foxx made the announcement at the Pro Walk, Pro Bike, Pro Place conference, the largest gathering of, transportation engineers, city planners and professional bicycle-pedestrian safety advocates and practitioners in the country.
“Safety is our highest priority and that commitment is the same regardless of which form of transportation people choose, including walking and biking,” Secretary Foxx said.  “This initiative is aimed at reversing the recent rise in deaths and injuries among the growing number of Americans who bicycle or walk to work, to reach public transportation and to other important destinations.”
Injuries and fatalities of pedestrian and people bicycling have steadily increased since 2009, at a rate higher than motor vehicle fatalities.  From 2011 to 2012, pedestrian deaths rose 6 percent and bicyclist fatalities went up almost 7 percent. 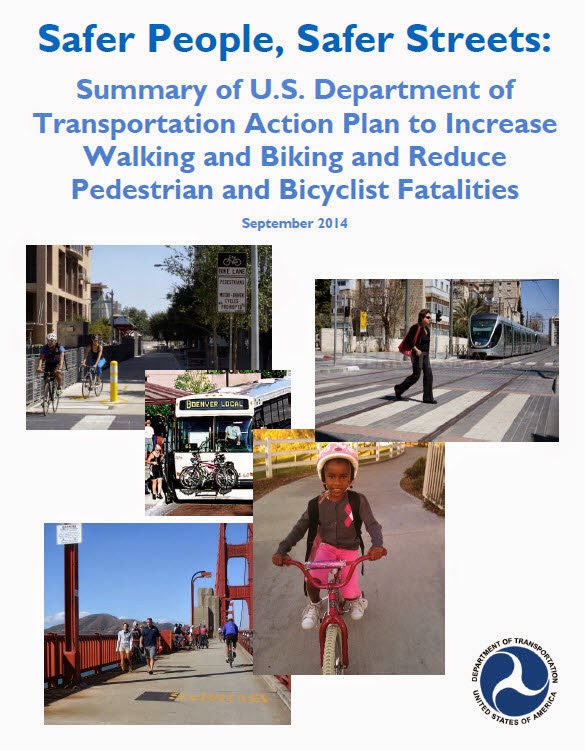 The new pedestrian and bicycle safety initiative will promote design improvements to ensure safe and efficient routes for pedestrians and bicycles, promote behavioral safety, and provide education to help individuals make safer travel choices. The initiative will also encourage vehicle safety by drawing on current crash avoidance technologies to alert motorists to the presence of bicyclists and pedestrians.
The initiative will begin when the Department’s Federal Highway Administration (FHWA), Federal Transit Administration (FTA) and National Highway Traffic Safety Administration (NHTSA) field offices survey routes for pedestrians and cyclists with local transportation officials and stakeholders to understand where and why gaps exist in the non-motorized transportation network and strategize on ways to close them.  Gaps are areas where the risk of a crash increases due to the lack of sidewalks or other safe infrastructure. The Department’s Federal Motor Carrier Safety Administration (FMCSA) and Federal Railroad Administration (FRA) will participate in assessments to gain understanding of non-motorized crashes involving truck and trains.
Among the many resources the Department will provide will be a guide to creating “road diets,” in which roadways with lower traffic volumes are redesigned to add space for bicycle riders and pedestrians.  Studies show that road diets reduce all traffic crashes by an average of 29 percent, and when used on rural highways that pass through small towns, they can reduce crashes by almost half – 47 percent.  Additional resources will help practitioners incorporate small safety improvements into many road projects, address “last mile” safety for people taking buses and trains, and make it easier for jurisdictions to count and plan for people traveling by foot and bicycle.
The Department will work with local officials, advocacy groups, and safety organizations to help champion the use of the new resources by practitioners, law enforcement, and safety organizations.  It also will convene meetings with practitioners and researchers about practices and policies that have been barriers to creating safer streets for non-motorized users.
The initiative will also focus on improving pedestrian and bicycle routes that provide access to bus stops and train stations.  Research has shown that lower income communities have disproportionately higher rates of pedestrian deaths, as well as less safe pedestrian infrastructure, despite higher reliance on non-motorized modes and public transportation.
Click here for the USDOT Action Plan: Safer People, Safer Streets, Sept. 2014