Not familiar with how to ride your bike to downtown Fort Myers?  Here are some suggested routes for biking to the Nov. 10th Streets Alive event.

If you want to ride your bike to the River District/downtown Fort Myers Streets Alive event on November 10th, here are some suggested routes.  Note that these routes may not be appropriate for inexperienced cyclists or those with young children in tow.  Also, most routes have sidewalks that can be used as an alternative to riding on the road.  Below are links to six suggested routes from various starting points.  The distances range from 4 to 10 miles roundtrip.  Hope to see you there! 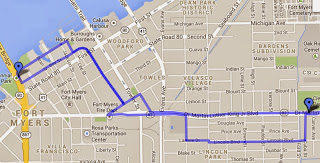 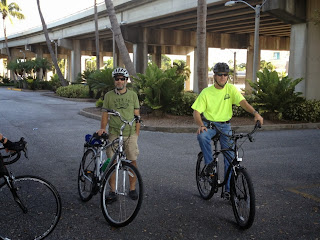 In addition to these routes, if you're not an experienced cyclist, you may want to try to route that Andy Getch used on the Oct. 13th bike audit ride .  He took his team in the general direction of the McGregor corridor, riding wherever possible on-road on quieter parallel low volume local streets. The route took riders south on Deleon Avenue to Colonial Boulevard  for a rest stop at the Walgreens parking lot on Colonial Boulevard and Sommerset Drive. The return ride coursed back along Sommerset Drive, connecting to the sidewalk on McGregor Boulevard, around the golf course to reconnect to Cortez Avenue with a return to Centennial Park. Most of these neighborhoods are well connected with many other options and connections to McGregor Boulevard and US 41.


Hope to see you on November 10th!