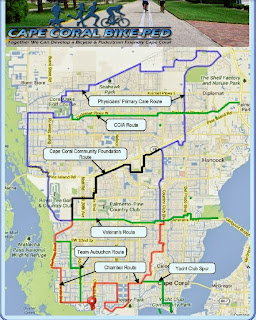 Kudos to CCBP for its successful launch of the new 90-miles of connected bike routes on the Cape, and for celebrating the progress with City Council and many public/private partners that made this possible.

Cape Coral Bike Ped member Gary Aubuchon updated the Cape Coral City Council at its September 23, meeting on the progress made to date on the Cape bike routes project.  He did so on behalf of Carolyn Conant who was not able to be present, saying " We are here today to celebrate and to publicly thank those who have made this day possible."

One year ago the Council unanimously approved the Resolution establishing Cape Coral Bike-Ped, a project whose mission is to “develop a system of interconnecting bike and pedestrian routes throughout Cape Coral for everyone to enjoy."

·        To raise the money necessary to create and identify the routes, CCBP modeled its program in part after the “Adopt a Median” signs.
·        Many of the Route Sponsors independently raised funds from their members and others to underwrite the cost of route sponsorship.
·        The revenue raised from the sponsorship signs coupled with the green traffic control signs will allow the City to create over 90 miles of interconnected bicycle routes throughout the City.
·         In less than 6 months, the Cape community came together in a true public-private partnership to raise all the funds necessary to create every bike route in CCBP's plan.
·        Mr. Aubuchon presented the map showing the major route sponsors, including: The Cape Coral Chamber of Commerce, Physicians’ Primary Care, The Cape Coral Community Foundation, The Cape Coral Construction Industry Association, and Team Aubuchon.
·        In addition, the large donors include: Kiwanis Club of Cape Coral  Rotary Club of Cape Coral North, Century Link, Smart Companies, Cape Coral Hospital, LCEC, Tim Collier State Farm, Rotary Club of Cape Coral and many other businesses, individual and organizations that have helped to fund the Cape Coral Bike-Ped effort.
·        The City of Cape Coral has donated labor and Lee County’s Department of Transportation is providing signage for the Veteran’s Route.
·         Representatives from several of these donor organizations were present for the Council presentation.
·        Public Works will begin installing the first signs in November and all routes will be completed by the end of 2014.
·        Benefits of the miles of interconnecting bike ways include: increase tourism, improve property values and bring positive recognition to our city.

Mr. Aubuchon closed by thanking the Mayor, Members of Council, City Manager John Szerlag, Park & Recreation  Director Steve Pohlman, Public Works Director Steve Neff and his staff for encouraging this public/private partnership and for the  hard work and cooperation that made it happen.

The Mayor and Council members thanked Mr. Aubuchon for the report and expressed a special thank you to Carolyn Conant, and the CCBP Team she guided, for their outstanding achievements in such a short time.