We learned last week that the new Florida law about public comment at government meetings means that the public now has the opportunity to speak at BoCC Management and Planning (M and P) meetings (which occur the first Monday (1:30-3:30 p.m.) of each month), where topics are discussed in depth by commissioners in a workshop format.  BikeWalkLee is looking forward to this new opportunity to participate in the process and sent the following letter to commissioners asking them to consider allowing the public to comment at the beginning of discussion of each agenda item topic rather than taking all public comment at the beginning of the meeting.  What do you think about the proposal? 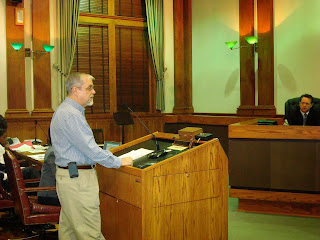 County Commissioners,
We were pleased to learn last week that the new Florida law requiring that the public be given an opportunity to speak at all government meetings means that there will now be an opportunity for the public to comment at County Management and Planning ( M & P) meetings.  Since these are the meetings where there is more of an in-depth conversation among the commissioners about a specific issue, it's important that the public have an opportunity to share its perspective and views at this stage in the deliberations instead of only being able to speak when the Board is getting ready to vote on the topic.

In structuring how this public comment opportunity will be implemented, we would suggest that the public be allowed to speak at the beginning of the consideration of each item on the agenda rather than having all public comment at the beginning of the meeting.  This is especially important for M & P meetings, where there is a more in-depth conversation on each topic.  This approach is used effectively by most municipalities, by most county committees, as well as the MPO Board and its committees.  BikeWalkLee is an active participant in many of these deliberations throughout the county and there is a marked difference in the two approaches in terms of citizen engagement and feeling like public input is truly being considered by our elected officials rather than just a pro forma legal requirement.

We look forward to this new opportunity to participate in M & P meetings, and appreciate your consideration of our suggestion.