At Friday's bi-annual joint meeting of the Lee and Collier County MPO Boards, officials discussed several issues of importance, including continuation of the LinC transit line between the two counties and the development of each county's 2040 LRTP.

LinC:
At the Oct. 18th Joint Lee and Collier MPO Board meeting, there were several presentations on joint projects and issues of concern to both MPOs.  One of the issues that BikeWalkLee is tracking closely is the LinC transit line that connects Lee and Collier counties.  The LinC route runs from Immokalee Road east of US 41 in Collier County to the Coconut Point Mall in Lee County.  This route was initiated in October 2011 after several years of collaborative efforts between Lee, Collier, Bonita Springs, and FDOT.  The service was funded with an FDOT Service Development Grant, with matching funds from the 3 jurisdictions, with the intent of being picked up by the local jurisdictions when the 3-year grant period expires (Oct. 1, 2014).

Both the joint Collier/Lee TAC and CAC committees discussed this issue in their meetings and reported to the joint board that they supported the continuation of the services and urged the staff and boards to work together to find the necessary funding to continue this line.

At the joint MPO meeting, Steve Myers of LeeTran presented a report, along with graphs and charts, showing that the LinC Route 600 is highly successful, with ridership above projected estimates and steady increases each year.  Between 2012 and 2013, ridership increased by 22%.  Since 2011, the ridership has gone from 6,000/month to 10,000/mo. 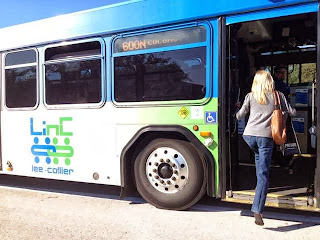 Ann Pierce, representing BikeWalkLee, spoke about the importance of continuing this route.  Ann stated that one bus regularly and reliably delivers workers and shoppers from Collier County to the Coconut Point Mall and beyond; and the same - to the terminus at Creekside Business Park on Immokalee Rd. where among the many businesses located there, just two – Arthrex and North Naples Hospital - employ some 2,000 people.  Service such as this keeps innumerable autos off the roads - reducing congestion, surface wear and maintenance and accident frequency. It is also a significant measure in sustainable planning - a vital prerequisite to attracting national firms to this area.  It is also a bold, salient and effective link in forging a regional chain of collaboration and cooperation establishing coordination between Lee and Collier counties...something that is becoming ever more essential for success in the new, highly competitive universe of federal funding.

Ann pointed out that all federal agencies are seeking to maximize the impacts of every grant and funding dollar, and targeting especially those areas that have shown the commitment, the political maturity and the sustained initiative to move beyond jurisdictional boundaries in the service of a larger vision.

With Board support, the staff is planning to begin the reviews and analyses of the route necessary to continuing its benefits to both Lee and Collier counties and will bring the issue back to the joint Lee/Collier MPO Board meeting in March for action.

2040 LRTP:
The MPO staff of both Lee and Collier made presentations to the joint board about their respective plans for developing the 2040 LRTP.  Lee MPO's Executive Director outlined the extensive efforts underway in Lee, working closely with the MPO Board's Executive Committee, to develop its 2040 plan.  Don discussed the Peer Exchanges that the Lee Board have held, with plans to steal some good ideas from other communities.  He also outlined the importance of the land use scenarios currently under development, the need for plans that are realistic in terms of available revenues; new approaches to public engagement, and the need to update some of the elements of the plan, such as bike/ped, transit, and freight.

Darla Letourneau, representing BikeWalkLee, spoke about the importance of the efforts underway in Lee County to  do a major overhaul of the process and content of our 2040 plan.  At the end of 2035 LRTP process the Lee Board set in motion studies and changes to move us in new direction, including land use scenarios, a rail feasibility study, a focus on fix it first vs. new capacity, new public engagement approaches, etc.

Letourneau thanked the Board and staff for their efforts and also emphasized the importance of the lessons learned from other communities through the series of "Peer Exchanges".  Letourneau stated that the financial realities are very clear and the plans can't be business as usual because there is little money and the MPOs need to develop plans that live within available resources.