On June 3rd, the Lee MPO submitted its TIGER V grant application for the Lee County Complete Streets Initiative. This is the third request for TIGER funding for this initiative, and we're hoping that the third time is the charm, as it was for Tampa's Riverwalk Project.

Since the USDOT's announcement for this round of funding on April 22nd, BikeWalkLee has been working with the MPO Director and the Alta Planning + Design team over the past month to update and improve the application package. The application for TIGER V funding is for a "Complete Streets Initiative tied to the MPO's Countywide Bicycle Pedestrian Master Plan. The network includes the construction of pathways, bike lanes, sidewalks, bus shelters and sidewalk connections, wayfinding signs, bike parking, and bicycle/pedestrian intersection improvements to connect up, close the gaps along the Tour de Parks route, the University Loop, and the Bi-County Connector, as envisioned in the MPO's master plan. The result would be a connected corridor of biking and walking facilities linking downtown Fort Myers across Lee County south to FGCU and Bonita Springs, and ultimately to Collier County by transit.

The proposal requests $10.5 million in TIGER V funding, which will be combined with $2.7 million in local and state matching funds, for a total of $13.2 million. 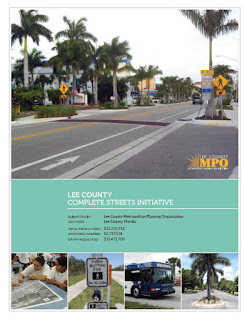 Now we wait for the grant awards to be made, which will occur in August or early September. We know that it's a highly competitive national process (with only 5% of the applicants being funded in previous rounds), but we've got our fingers crossed. Thanks to everyone who contributed to the grant submission...and a special thanks to Don Scott, the MPO Director, and the fabulous Alta team!

6/14/13 Update:  This week, Secretary LaHood reported  that the demand for TIGER 2013 has been tremendous, with more than 500 applications submitted seeking about $8 billion in funding. That exceeds the funds Congress made available to USDOT by about $7.5 billion!