Kudos to Carolyn Conant and Cape Coral Bike-Ped, one of BikeWalkLee's supporter organizations, for its amazing efforts, which are highlighted in this feature story in today's News-Press. This 92-mile biking route in Cape Coral is going to be a game-changer for Lee County.

Carolyn Conant starts out by explaining, “I happen to be a casual bicyclist. I walk a lot and I ride a little.” 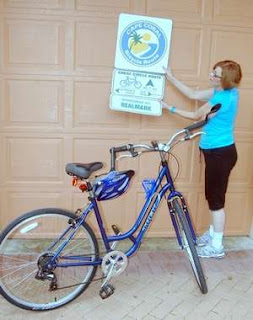 So why, then, has she devoted the last year-and-a-half of her life working tirelessly and mostly under the radar to develop an intricate 92-mile web of interconnected bike paths and bikeways stretching from the yacht club basin to Burnt Store Road?

“People ask, ‘Why are you involved in this?”’ she said. “The reality is, I like to do things that I think are good for the city.”

Cape Coral Bike-Ped was born of a casual conversation about a year and a half ago, Conant recalled.
“I was talking to the director of Public Works about how to create more bike lanes in my area, and he said, ‘Carolyn, we need more than that. We need a master plan to connect the bike lanes that we have.’”

With her background in construction management as a springboard, Conant was off and running.
“I ended up getting together a group of people who knew what they were talking about. We didn’t tell anybody that we existed,” she said. “We got a resolution from the city of Cape Coral saying they endorsed a partnership with us, and my direct liaisons are the director of Parks and the director of Public Works. So this is a serious, serious real partnership.” 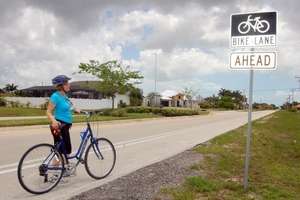 “I headed up the Greenscape Project many, many years ago which landscaped the medians on Del Prado Boulevard,” she said.

“Carolyn’s one of those people who has been involved in a lot of things over the years. Most of them just to improve the lifestyle of the city,” said Maureen “Moe” Beneke, executive director of the Cape Coral Construction Industry Association (CCCIA).

“I don’t think she looks at it from a standpoint of ‘this is what I want.’ Living in Cape Coral is just better because of this.”

Bike-Ped does not include constructions of new bike paths; Cape Coral already has miles of paths and rider-friendly roads, called “share roadways” which take bicyclists off congested highways and routes them on alternate safer roadways that may not be able to accommodate bike lanes.

But they are not connected.

“Years ago, people would be riding bikes and they got hit by cars. So we put a few bike lanes in,” Beneke said. “The problem with that is, you’re riding along on your bike and the bike lane ends. Then you have a choice; either go out into traffic or turn around and go back.”

“Our plan of attack was to take steps to identify routes, then mark the routes with distinctive signage,” Conant said. “Right now, we’ve identified the routes and are in the process of raising the funds to mark them.”

“Improvements will happen as time and funds permit,” she said. “But actually, we just launched this project; People didn’t know about it until January of this year.”

“But if you talk about the volunteer and in-kind contributions from the city, I imagine… the cost would be at least three to five times greater, if not more.

“That is why this partnership is such a great thing. By joining together the city, volunteers, the business community, clubs and civic organizations and individual contributors, we can create something of value for the community for a fraction of its true cost, and hopefully do it well.”
Conant said advertising is prohibited on public roads.

“But you can have someone adopt or sponsor a route sign. So that is how we’re raising the funds.”
The campaign has drawn the Cape Coral Chamber of Commerce and CCCIA into a friendly competition. The Chamber has signed on to raise $24,000 for the southern portion of the Great Circle Route and CCCIA has taken on the $14,750 Diplomat Route. Both organizations have been soliciting businesses and individuals to sponsor signs at $300 each or 10 for $2,500.
While advocates for Bike-Ped say it will enhance the Cape’s quality of life, improve health and make for safer roadways, there is another major benefit.

“This project is very good economically. Cities like Minneapolis, Seattle, Boulder, New York City, are really going gangbusters into creating bicycle routes,” Conant said. “Part of this has to do with quality of life, but the other reality is economics.

“We don’t have mile-long sandy beaches; we need something that attracts a certain type of resident. The Bike-Ped gives us that little extra that nobody around us has,” Beneke said.

“If you look at the cities in national magazines that are listed as the best place to retire or the best place to live, one of the things that they always talk about is parks and things like Bike-Peds. That’s the sort of thing they like. It makes a city stand out.”

Conant said no signs will be erected until all the money has been pledged.


“I had hoped to have the Great Circle Route done within two years, and we’re already kind of ahead of where I expected to be,” she said.


“I can’t see any reason why we wouldn’t want one,” Beneke said. “It connects the city, all the different parts. We are always so sectioned of – northeast, southeast, southwest, northwest. It makes a connection and an intermingling route between us that doesn’t involve getting in your car.”

“There’s this tremendous opportunity for us take to take something that the Cape could be really, really good at by creating these routes and then publicizing them,” Conant said.