Cape Coral, FL. (June 24, 2013) – The community has come together to begin to create a system of over 90 miles of interconnected cycling routes within Cape Coral. 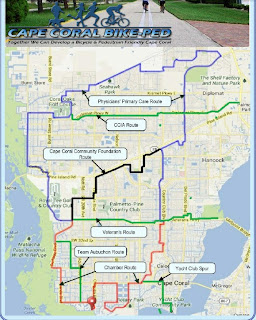 Raising the funds to bring this dream to fruition was a daunting task but now, residents, business owners and professionals are making this important project a reality.

Physicians’ Primary Care Route is the 30 mile section of the route that will circle Northern Cape Coral. Physicians’ Primary Care has committed to raising the funds necessary for completion of this route. As Dr. Mary Yankaskas notes, “this project fits with our mission of promoting health and well-being in the communities we serve.” Rotary Club of Cape Coral North was one of the first major donors to step up to commit $5000 toward this route.

The Cape Coral Chamber of Commerce has already raised the funds to mark the Chamber route with distinctive signage. Special thanks to Cindy Gallagher, Beverly Black and Diane Everhart for spearheading this effort.

The Team Aubuchon Route has funded the four mile route in Southwest Cape Coral.  Gary Aubuchon, a member of Cape Coral Bike-Ped Committee and Owner & President of Team Aubuchon, has also been instrumental in bringing the community together behind this effort.

The City of Cape Coral Parks & Recreation Department is sponsoring the Yacht Club Spur. Steve Pohlman, Director of the Parks & Recreation Department and Steve Neff, Director of Public Works have been the primary liaisons from the City to this volunteer project.  As Steve Pohlman notes, “more cyclist, walkers and runners will hopefully visit the many parks which are along these Bike-Ped routes.”

The CCCIA Route:  The Board of the CCCIA (Cape Coral Construction Industry Association) unanimously approved sponsoring a section of the route early on in the planning.  Anthony Greco, Jr., President of the CCCIA, notes “the CCCIA is committed to improving our community and this project fits within those parameters.  The markings and continuity of these paths are essential to the safety and enjoyment of our citizens and visitors.” For more information, contact Maureen “Moe” Beneke at moe@cccia.org.”

Veteran’s Route: The City of Cape Coral Public Works Department is in negotiations with Lee County Department of Transportation concerning marking this route which goes from Lee County pathways onto City of Cape Coral share roads with the distinctive route signage.  Cape Coral Bike-Ped is asking the county to provide this signage as an in-kind contribution. Hopefully, Lee DOT will place these signs on the county pathways and the City will place the signs on city share roads that are part of interconnecting these Veterans’ routes.

In less than 6 months, the community rallied behind this effort with various businesses, club & civic organizations agreeing to raise funds to sponsor particular routes which will be renamed for their organizations.   While no work can commence until all of the funds are raised for a particular routes, the Chamber Route and the Team Aubuchon Route are completely funded, so the City will begin the engineering work and placement of signage needed to create these routes within the next few months.

The ultimate goal is for Cape Coral to become a premier cycling destination.  Help these groups to raise funds to make this vision a reality!  There is pride in our community coming together to create cycling routes that can increase tourism in our community and improve the quality of life for many of its citizens including that of our children.

You can also send your tax-deductible contribution in any amount.  Go to www.CapeCoralBikePed.org to donate on line or send your check made out to “Cape Coral Bike Ped” to:
Carolyn Conant - Cape Coral Bike-Ped
2616 SW 51st Street, Cape Coral, FL. 33914