Thanks to everyone involved in the Tice walking audit and kick-off of Travel SafeLEE campaign!
Background: 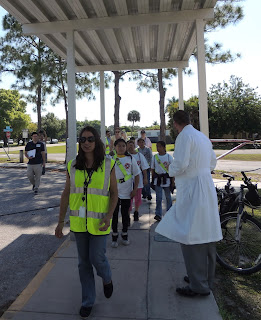 On May 8th and 9th, the Tice Historic Community was the site of an in-field Technical Assistance Grant from the US EPA and administered through the Project for Public Spaces, or PPS.  FGCU's Southwest Florida Center for Public and Social Policy partnered with BikeWalkLee, Lee County Office of Sustainability and the Tice Historic Community to apply for this grant, and the community was awarded one of only nine grants given nationally in 2013. 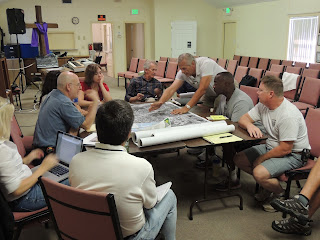 BikeWalkLee also partnered with FDOT District 1 to integrate the launch of their statewide bike/ped safety campaign in Lee County, called "Alert Today, Alive Tomorrow", with a press conference during the Tice walking audit project.  BikeWalkLee was part of the team that organized the events and did media outreach.  It was great to have BikeWalkLee local representatives and partners in other Lee County municipalities and communities to participate in the walking audits to "learn by doing" and take it back to their own communities.
The story was covered by NBC-2 News, Fox News, WINK, News-Press, Florida Weekly, Univision TV, and WGCU radio.  A special thanks to FDOT District 1 Secretary, Billy Hattaway, who participated in the full 2-day event, leading walking audits, and being a featured speaker at the press conference.  It was great to have Commissioner Mann and Fort Myers Councilwoman Brown's participation and support.  Everyone involved gives a big THANK YOU to Tice Elementary School officials, teachers, parents, and students for their incredible participation and welcoming us to their school and their community. 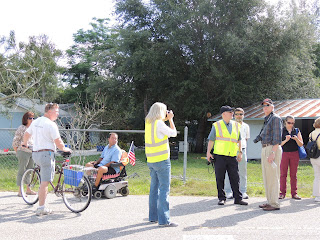 Below are some photos and links to media coverage.  This is the beginning of a bike/ped safety campaign, not a one-day event, so we'll be working with media over the summer to keep a spotlight on how to improve bike/ped safety in our community.

Walking with a group of Tice Elementary students near school, Lee County engineers and sustainability officials couldn’t help but notice the lack of sidewalks.

“This is a pretty narrow road so what do you do if two cars pass through here?” Lee’s Sustainability Manager Tessa LeSage asked the children. 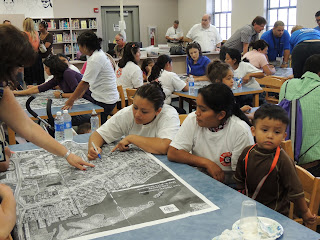 At a school where most of the student body walks to class, Tice students are used to dodging cars traveling faster than the 35 mph posted speed limit. On Thursday, state transportation and county officials took walking tours of the streets around the 86-year-old Fort Myers school and listened to suggestions from students and residents on making the streets more walkable.

Lee, which had 58 pedestrians and 17 bicyclists killed from 2007-10 and ranks in the top 10 in the state for most pedestrian and bicyclist fatalities, recently won a $15,000 grant from the U.S. Environmental Protection Agency to study the walkability of its streets. Lee brought in three out-of-state community-building experts to engage the community this week. 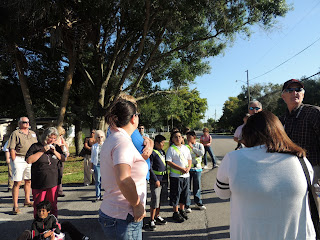 “We can’t just build sidewalks on every road. That’s too expensive,” LeSage said. “We have to prioritize. That’s why it’s so valuable to talk to the people who are walking these streets everyday and get their opinions on which streets need improvements.”

Collier County, in comparison, had 22 pedestrian and nine bicyclists killed from 2007-10. The Tice community is one key area in Lee that needs to be improved. Billy Hattaway, the state transportation district secretary for this area, said Palm Beach Boulevard has been the site for many pedestrian/bicycle fatalities through the years. 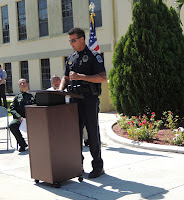 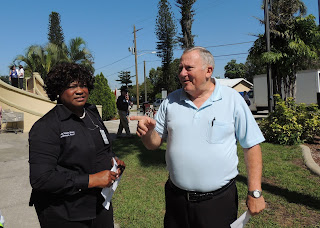 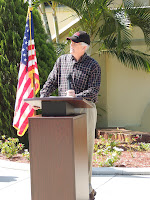 “We’ve had challenges with the intersection of Palm Beach and Tice Street and as a state agency we’re going to look to see how we can improve pedestrian access at that intersection,” Hattaway said.
Tice teacher Marshall Long believes the community not only needs more sidewalks, but more street lights and crossing guards. The school has just two crossing guards, one stationed at Palm Beach Boulevard and Tice Street and the other in front of the school.

Long said about 75 children and 40 parents walk to school each morning.
“We’ve been so fortunate not to have a student killed,” Long said.

Lee County’s EPA grant allowed it to hire the non-profit Local Government Commission in Sacramento, Calif. and the Walkable and Livable Communities Institute in Port Townsend, Wash. The group will report its Lee County findings and potential solutions in four to six weeks.
Kelly Morphy, the executive director at Walkable and Livable Communities Institute, believes one solution could involve using existing paved asphalt and painting a section for pedestrians. She said that solution should only be used on low-speed streets with little traffic.

“By narrowing the roadway, cars will slow down,” Morphy said. “It’s not a bad thing to create confusion for a driver. It forces them to concentrate.”

Lee County’s code would have to be changed to allow the painted sections, she said. Fifth-grader Tiffany Salinas said changes need to be made for the safety of Tice’s 479 students. Hattaway said part of the solution involves educating pedestrians and drivers.

“I compare this to seat belts,” Hattaway said. “Only 50 percent of people used seat belts in the early ’80s. Now, it’s up to 90 percent. So we can change behavior. You can’t change it in one day.”


video
FORT MYERS, Fla.- A new study points to Lee County as being one of the worst in the state when it comes to pedestrian safety.

Alex Lopez, a student at Tice Elementary, is showing a group the path he takes to school every day.
"The dangerous part is the road we have to cross," said Lopez.

Lopez and nearly half the students who go to his school walk to get there. This has caught the attention of Florida Department of Transportation officials like Billy Hattaway, district secretary for the FL DOT.

"There's a school bus stop over here for middle school and we don't even have a sidewalk for them, said Hattaway.

The group is going on what's called a "walking audit" to get a better idea of what kids go through every day getting to school.

"Alot of what we need are sidewalks. You saw on the walk, we had ditches on both sides of the road and no sidewalks," said Hattaway.

The state launched on Thursday its "Alert Today, Alive Tomorrow" safety campaign. It's designed to create awareness for pedestrians statewide. State officials in Lee County County neighborhood because of its high foot traffic.

"We see alot of this in the area... people walking in the street having to bike in odd ways use unpredictable behavior," said Kelly Morphy, Executive Director of Walkable and Livable Communities Institute.

So what can be done to make this commute safer for students?

"We're looking at intersections behind me at Tice and Palm Beach Blvd. Palm Beach is a state road and no sidewalk between the state road and school, going to see if we can work with city and county to get a sidewalk ," said Hattaway.