Now is the time for citizens to tell their elected officials what they think about proposed service cuts in transit and parks.  Make your voices heard before the June 24th BoCC budget workshop. 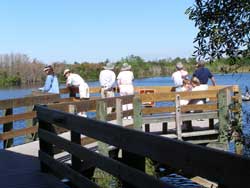 On Monday, June 24th (1:30 p.m.) the Commissioners will instruct staff on whether these proposals should be incorporated into the budget.  There is no opportunity for public comment at the workshop but it can be viewed on Ch. 97, on their website, or in Commission Chambers. Take the time to communicate with your elected officials before the June 24th meeting.