Update on Oritz Avenue: Community efforts in support of safe and walkable neighborhood


As reported in the April 6, 2012 BikeWalkLee blog, Ortiz Avenue is a topic of ongoing discussion in Lee County and in the Palm Beach /Tice Community Plan.  This is an update on the effort to ensure that the street's northernmost section is safe, walkable, and enhances economic opportunities in the neighborhood.  It has been the position of BikeWalkLee and several members of the planning panel that a 2-lane section with a turn lane and strategically placed crossing medians would most effectively accomplish these goals. 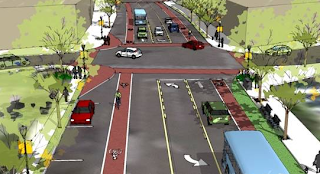 Ortiz Avenue runs north/south between SR 80 and SR 82 approximately one mile west of I-75.  The street is significant for its bike/ped potential as it is identified as part of the County's Primary Bike/Ped Network in the MPO Bike/Ped Master Plan.  Previously, Lee DOT planned Ortiz to be widened from a two lane road to a four lane with a median and turns lanes and the speed raised to 45 MPH.  This decision was, in part, based on modeling that that showed an increase in automobile trips.

At the September 25, 2012 meeting of the Palm Beach / Tice Planning Panel Lee DOT gave a presentation on their thoughts regarding how they might re-think this section to comply with the Lee County Complete Streets Resolution.  They noted that there are several policies currently under revision in Lee County that might inspire a new analysis regarding the street design and number of lanes.  This includes revisions to level of service standards in the Lee Plan and the Lee County MPO's update t the 2040 Long Range Transportation Plan.

Dr. Margaret Banyan and Paul Moreno, panel members, gave a follow up presentation, which focused on four key strategies to ensure that the street is designed within the appropriate context of the neighborhood.  These were as follows:
·                    Accept congestion at certain times of day / week: If there is congestion in future out years, this    will likely occur only during peak periods of the day.
·                   Encourage more walking, biking, and transit trips to take traffic off of Ortiz.
·                   Investigate additional network options to distribute traffic.
·                   Do all three!


Increasing the road / street network has several advantages of reducing automobile trips to get from one destination to another, distributing traffic such that wider roads are not needed, (especially in the case of Ortiz) increasing property values in industrial areas and neighborhoods by increasing access, and finally isolating truck from residential automobile traffic.

We appreciate Lee DOT's continued efforts to work with the community to reduce the number of travel lanes and speed as a way to make Ortiz Avenue's northern section a walkable, economically viable, and safe street.