Lessons from TN: move past road-widening as congestion reduction strategy 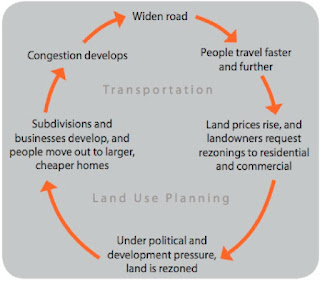 Last week, a new report was issued by the Tennessee Department of Transportation entitled "Removing Barriers to Smarter Transportation Investments" which has some exciting lessons on transportation and land use planning that are applicable for Lee County.   Click here for the full report from TDOT.  Below is an article about the report in DC.Streetsblog.org.

Tennessee DOT Moves Past Road-Widening as a Congestion Reduction Strategy

by Tanya Snyder
In the late eighties and nineties, every traffic issue the Tennessee Department of Transportation faced was assigned the same solution: a bypass. But over the years, the department has come around to a new way of doing things, according to 40-year TDOT veteran Ralph Comer. Comer says the current commissioner, John Schroer, wants to become known as the “no-bypass commissioner.” He simply believes there are usually more cost-effective ways of solving transportation problems.


"Context sensitive solutions" preserve main streets like this one in Franklin, Tennessee instead of turning them into high-speed thoroughfares.


This way of thinking led Schroer, Comer, and the department into a conversation with Smart Growth America. They teamed up to examine the state of Tennessee’s transportation system and devise a path forward, bringing together an impressively coalition, from the Tennessee Disability Coalition to the Sierra Club, the public transit association to the road builders association. One irrefutable fact brought them together: The TDOT project pipeline would cost nine times more to construct than available funding would permit. Something had to change.

Tennessee is in better fiscal shape than most states and is one of a small handful of states with zero debt – meaning it pays zero percent of its budget toward debt service, leaving a lot more for infrastructure. That’s a luxurious position in today’s economic context. So if a close examination of cost-effective transportation strategies can be transformative for Tennessee, just imagine what it can do for states even more desperate to get costs under control.

The report that came out of the TDOT/SGA sessions [PDF] isn’t a project-by-project prescription, and it isn’t binding. But it looks at “context-sensitive solutions,” rather than building the same road through vastly different landscapes.

“We can’t afford single solution investments anymore,” Millar said. The transportation system needs to move people, goods, and services at the same time it supports the main street economy. The best part is that the “context-sensitive solutions” TDOT is looking at often mean canceling big-ticket road-widening projects in favor of greener approaches at a fraction of the price.

The report lays this bare:
TDOT cannot always solve congestion by building more, wider and faster state roadways. There will never be enough financial resources to supply the endless demand for capacity. In fact, TDOT currently has nine times more projects in its project list than available funding will cover.

Further, TDOT realizes that the “wider and faster” approach to road construction cannot ultimately solve the problem. Sprawling land uses are creating congestion faster than roadway capacity can be increased. The illustration [below] depicts this never-ending cycle of transportation and land use changes. TDOT intends to work to manage capacity by better integrating land use and transportation planning. The desire to go “through” a place must be balanced with the desire to go “to” a place. Roadways have many purposes, including providing local and regional mobility, offering access to homes and businesses, and supporting economic growth.

Source: Removing Barriers to Smarter Transportation Investments
Of course, TDOT isn’t a land use agency. So they’re partnering with local governments to collaborate on transportation and land use decisions. And, according to Millar, the commissioner is prepared to say, “If you guys are going to sprawl, we can’t support you. We can’t afford that. You guys are going to sprawl on your own. Or maybe we can do things a different way.”

What the agency can do on its own is “right-size” the projects on its list. “There may be a $40 million or $50 million [bypass] project that achieves a transportation objective,” said Millar. “And you can achieve 95 percent of that objective for 10 percent of the cost.” Maybe the solution is to remove curb cuts or optimize the traffic light timing on an existing congested roadway, allowing traffic to move more freely. Operational improvements like that can reduce congestion for a fraction of the price of adding a new bypass.

“What’s the appropriate solution?” Millar went on. “Do you spend the $50 million that you don’t have? Or do you spend $5 million and get 95 percent of the way there?” Looking at the problem that way generated a lot of consensus among the coalition.

Without a set of binding recommendations on individual projects, the report provides the next best thing: a set of performance metrics by which TDOT can evaluate projects. “It was suggested in the first meeting that important goals or metrics might include economic impacts, job generation, cost saving potential, applicability to capital improvements/maintenance/operations, sustainability, equity, and ease of implementation,” the report says.