BikeWalkLee is honored to have received this prestigious award.  We view it as recognition of what the county has collectively achieved, working in collaboration with our coalition.  Thanks to the Florida APA for the honor and to everyone who has been part of the Lee County complete streets and sustainable transportation efforts!


At the annual state conference of the American Planning Association Florida Chapter,  held in Naples, FL, last week, BikeWalkLee was awarded Outstanding Public Interest Group of the Year. This award acknowledged BikeWalkLee efforts “to help create a culture of planning that works to complete Lee County’s streets so that all users of our transportation networks are considered on the front end of any project or improvement”. Accepting the award on behalf of BikeWalkLee were Dr. Margaret Banyan and Ann Pierce.

BikeWalkLee is honored to receive this award as recognition of what the county has collectively achieved – through the Lee County Metropolitan Planning Organization, the Board of County Commissioners and county administration, and the five municipalities in Lee County -- working in collaboration with BikeWalkLee's coalition of 40 supporter organizations.  BikeWalkLee has tried to play a catalyst role, but we would not be successful without the support and cooperation of the many elected officials in Lee County, their agencies and staffs.  Lee County is making great strides in implementing complete streets, shifting to more sustainable transportation, providing more transportation choices, and enhancing the economic and social fabric of our community.

In giving this award, Florida APA President Merle Bishop stated: “BikeWalkLee’s active transportation focus contributes to the economic health of the community, the physical health of its residents, the environmental health of the region, and the quality of life for individuals and families in Southwest Florida.” BikeWalkLee  looks forward to a continuation of this collaborative partnership on the long term path towards a more livable, economically resilient, and sustainable Lee County.

Since its launch in 2009, BikeWalkLee's work has been recognized at the local, state, and national levels.  BikeWalkLee was a finalist for the News-Press "People of the Year" 2012 award; its efforts were reflected in the October 2011 awards by the Urban Land Institute of Southwest Florida recognizing Lee County's complete streets efforts and the MPO countywide bicycle and pedestrian master plan.  Founding members of BikeWalkLee have been recognized  as Florida Bicycle Association's Citizen Advocate of the Year in 2010; as finalists in both 2010 and 2011 of Lee County's Paulette Burton Citizen of the Year award; and as Florida Weekly's best advocate of the year in 2011.  In 2010, BikeWalkLee received Lee County Injury Prevention Coalition's "Injury Prevention Organization of the Year" award.  BikeWalkLee's work has also received public recognition by national organizations, such as the National Complete Streets Coalition, the League of American Bicyclists, Transportation for America, and the Alliance for Biking and Walking.

------------
A special thanks to the dozens of partners and supporter organizations that sent us notes of congratulations.  Here's the one from AARP of Florida, a founding BWL supporter:

Fantastic news and well deserved.  My congratulations and best wishes to all of the members of Bike/Walk/Lee on this tremendous recognition and honor. You guys are great and you just keeping hitting out of the park. We love what you are doing and what you are accomplishing. 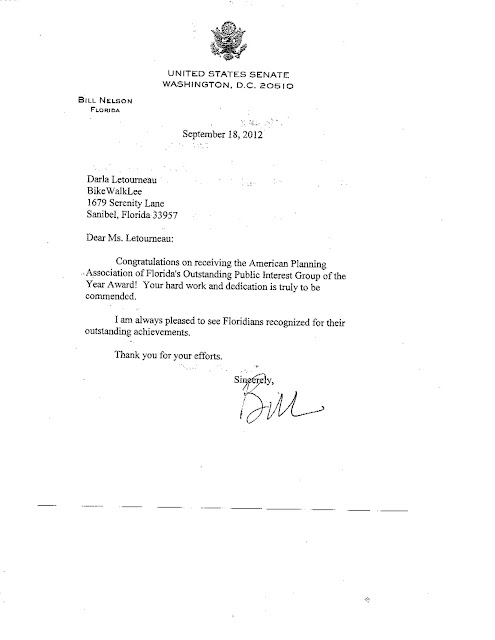