Complete Streets, a Lee County transportation policy adopted in 2009, is designed to “instill a culture that supports sustainable multi-modal transportation; where each mode of transportation is equally important and the demand for single occupancy vehicles is reduced by offering safe, convenient transportation alternatives". 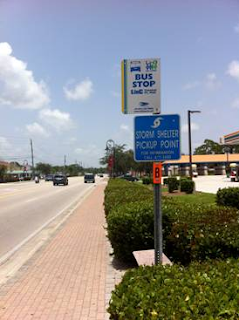 Earlier in the semester, the students had been briefed by Lee County staff members, Andy Getch and Tessa LeSage; learning about the characteristics of Complete Streets and how they may vary with differing road and community contexts.  Students learned what these streets were; how they served local areas, and how, with comprehensive planning an excellent design, they could safely accommodate motorists, pedestrians, cyclists and transit users of all ages and abilities.

Interestingly, the road that had the best accommodations for walking was Three Oaks Parkway.  This section had newer and continuous sidewalks but was also the one with the least "reason for walking".  Typical of suburban design, it offered little in the way of human-scale invitation.  3 Oaks is a 45-mile-per-hour, divided road with deep setbacks and long distances between structures.  While the road offers excellent motorist accommodations, it is vegetatively screened for the gated communities, resulting in  little sense of ‘place’.  The student team noted a lack of shade, benches, crosswalks to the County Park, or transit stop shelter.  This new suburban road offered good cycling facilities with well-marked on road bike lanes, yet cars consistently exceeding the speed limit often traveled into these bike lanes.

At the other end of the spectrum is Ortiz Avenue, a much older road.  Coursing through a large and much denser neighborhood, its narrow pavement and rim-bending potholes, cracked, overgrown and discontinuous sidewalks, and nonexistent bike lanes or paved shoulders; offered far more difficult conditions for motorists, cyclists and pedestrians alike.  The students also noted that signage was absent or blocked from view and the transit stop was simply a sign in a patch of grass and dirt.  Despite this, there are many pedestrians and cyclists traveling to a number of points of destination.

Another team took on West Terry street between Old 41 around Bonita Springs elementary school.  This area has a number of unique challenges, but also a considerable presence of walkers and bikers.  On this section, traffic consistently observed the posted 30 mph speed limit, conveying a sense of safety to pedestrians.  Recommendations were for sidewalk widening where they crossed railroad tracks, the addition of trees for shading, on-road bike lanes, and an ADA compliant transit stop shelter. The team was excited to hear that the City of Bonita Springs is working on this area and anticipates much improved conditions soon.

Each of these roadways presents planners and traffic engineers with its own unique set of challenges and opportunities.  One - a wide, fast, suburban highway needing more interest, cooling shade and a human-scale ‘reason to be there’.  Another - a neighborhood road that has become an area- wide thruway, too dangerous for the many pedestrians and cyclists and its almost nonexistent accommodations.  The third-a busy destination, with little fixes can be significantly improved.

The other teams analyzed Winkler Avenue, Estero Boulevard, McGregor Boulevard, and Veronica Shoemaker.  The students in Dr. Banyan's State & Local Government class have previously participated in bike/ped counts for select streets throughout the county, generating much-needed data.  Each of the teams add to the overall on-the-ground knowledge for counties and cities that improve our communities and educate our future leaders.  Thanks to FGCU for sponsoring this important work!