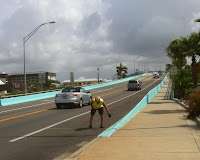 In yesterday's blog we reported on part I of our June 8th field trip to Fort Myers Beach: Fort Myers Beach's North Estero Blvd. is a model complete streets project. Part II of our assignment from the Fort Myers Beach Mayor was to provide suggestions for the County's Estero Blvd. Improvement Project, which is the subject of today's blog.
*See NBC-2 News interview with Dan Moser on 6/13,

o   San Carlos Blvd., from Summerlin up to the Matanzas Pass Bridge, needs to be reconfigured so that the travel lanes are narrowed from current 14 ft. to 11 ft., adding 4 ft. bike lanes on both sides.
o   At the smaller bridge just north of Buttonwood Dr, the road surface narrows, so there may not be room for bike lanes in that one section.  If that’s the case, sharrows should be painted on the road to clearly indicate to drivers that they must share the lane with bicycles.
o   The sidewalks in this section are in need of repair in several areas.
o   The continuous left turn (suicide) lane needs to be replaced with access management that includes dedicated turn lanes where appropriate.
o   The roadway improvements need to be designed for a maximum 35 mph speed. 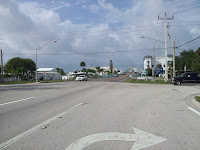 o   The area at the foot of the Matanzas Pass Bridge coming on island is very dangerous for pedestrians and especially cyclists.  For pedestrians, because a sidewalk exists only on one side of the bridge, crossing San Carlos Blvd at Main St is problematic, especially since the northbound motor vehicle configuration expands to two-lanes from one before it’s necessary (more on that to follow). 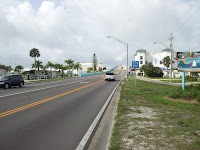 o   For cyclists’ needs, the additional northbound lane is added too soon. If it were left as one lane a left turn lane could still be provided and a bike lane could be included in the configuration (see below). 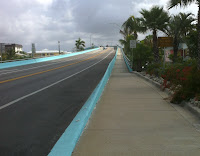 o   The lanes on the bridge should be reconfigured to reduce the breakdown lane on the left side from an 8 ft. lane to a 4 ft. bike lane, putting the extra 4 ft. on the right side of the trolley lane for a bike lane.  This will make it safer for bikes and not create the current conflicts with the trolley.  To do this only requires reallocation of space which can be accomplished by re-painting the lines on the bridge.  This is one thing that can be done now to improve the situation immediately (a green bike lane is recommended).
Many of the following problems can be resolved by reconfiguring the bridge.

Once you are on island, the reconfigured Estero Blvd. needs to have:
BikeWalkLee looks forward to being part of the Estero Improvement project public outreach effort.  We believe that the project should be a joint partnership between the city and the county so that this project, which is the very heart of Fort Myers Beach's identify and community character, be consistent with what the community wants.  This is much more than a road project--it is a redesign of the public space at the heart of this community.

To maximize the community involvement in this project, we suggest that the project team consider the use of innovative online interactive tools, such as MindMixer.   This is an exciting new community engagement tool, which acts as a virtual town-hall allowing community planning to happen online.  We invite you to check out the Burbank, CA website, which used this tool to develop their "Comp Plan" amendments.  We understand that Lee County staff is considering this tool for engaging the public in the Comp Plan amendments process.

BikeWalkLee thanks the Fort Myers Beach Mayor for inviting our input on this important effort.