FHP and SAO response to Letter to Governor Scott re: Tracey Kleinpell investigation

BikeWalkLee received responses this week from FHP and SAO to our May 31st letters to Governor, FHP Director, and State Attorney General on the official response to cyclist Tracey Kleinpell's death, and we responded to FHP.
See our response, requesting data and answers to more questions. 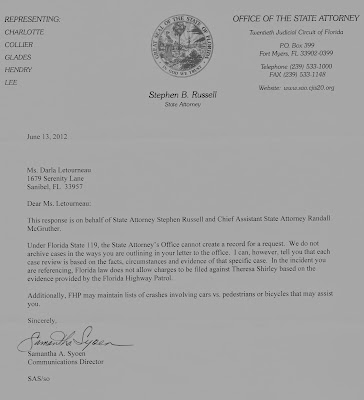 Governor Scott has received your email and has asked that I address the issues regarding the Florida Highway Patrol.

It is most unfortunate that Ms. Kleinpell was tragically killed while riding her bicycle in Lee County.  The men and women of the patrol work hard to investigate crashes in a professional, unbiased manner to determine why the crash occurred, who was responsible and to file the appropriate charges, when applicable.  As we are statutorily directed to investigate crashes, we are not in the position to recuse our members from investigating crashes as you have requested.

From 2007 to 2011, the patrol has investigated 224 fatal crashes involving bicyclists and 1189 fatal crashes involving pedestrian throughout Florida.  Those crashes resulted in 311 citations issued to parties involved.  You have indicated there is a troubling pattern of disregard for the rights of the most vulnerable road users.  We are always open to reviewing our practices.  If you could provide us with specific information concerning the pattern you are referring to, we will gladly review the information to determine if there was any unprofessional conduct by any of our members.

Our personnel in Tallahassee have reviewed the report and determined that Corporal Gissendanner conducted a proper homicide investigation. In order to charge any person with a crime in Florida, the law enforcement officer must have probable cause that a crime was committed.  There was no indication that probable cause for any crime existed in this crash.

We welcome any legislation that makes our roadways safer for our residents and visitors.  We appreciate your efforts in promoting pedestrian and bicycle safety in our state.

Dear Captain Welch:
Thank you for your June 18th response to our May 31st letter to Gov. Scott concerning the official response to cyclist Tracey Kleinpell's death.  We appreciate your timely reply.  However, it didn't respond to the questions we asked of FHP in our May 31st letter to Colonel David H. Brierton, Jr., FHP Director (see Attachments 1 and 2), and we have several questions about your response.  Subsequent to our letters, on June 1st the investigative file was made available to the public by the State's Attorney Office, which we reviewed as reflected in this letter.

1.  With respect to the data you provided in your following statement:
“From 2007 to 2011, the patrol has investigated 224 fatal crashes involving bicyclists and 1,189 fatal crashes involving pedestrian throughout Florida.  Those crashes resulted in 311 citations issued to parties involved."
This means citations were given in 22% of the bike/ped fatalities over the five-year period.  What you haven't provided (as requested in our letter) is a breakdown of who was charged -- the pedestrian, cyclist or driver -- and what were the charges? Were those charges civil or criminal?  In what percentage of the cases were vehicular homicide charges filed against the driver?

Although you haven't identified who was cited, we are concerned that only 22% of the cases resulted in citations.  If all of these were against the motorists, are you implying that the remaining 78% were the fault of the victim?  In Lee County, up until the time LeeDOT stopped gathering its own traffic crash data, we found that less than 40% (39% in case of cyclists and 35% in case of pedestrians) of all crashes between motorists and vulnerable users to be the fault of the vulnerable user.  (See Attachment 3.)  How could FHP’s data be so different?  BikeWalkLee would like a better breakdown of FHP’s data, including specifics about the other 1,102 fatalities (1,413-311 = 1,102), and which parties were at fault in the 311 in which citations were issued, as well as the type of charges. We feel this discrepancy is the crux of the issue and relates to our contention that there’s an inherent bias in cases investigated by FHP.  Once we have this data, we will be able to respond to your request for evidence of a pattern of bias.