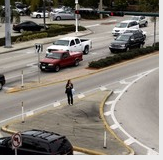 City and county officials
agreed to work together Wednesday to
eliminate what is called “the Berlin Wall in
Naples” — otherwise known as U.S. 41.

Council members and county
commissioners at a joint meeting will now
have their staffs study the possibility of
relocating U.S. 41 to the parallel
Goodlette-Frank Road, Sulik said.

What is now U.S. 41 — also known as Ninth
Street — would revert to a local route that
would create a business district friendlier
to pedestrians and motorists, Sulik said.
Two lanes could be eliminated to provide
parking for easier access to businesses,
she said.

Currently, trying to walk across the road at
what is known as the Four Corners — the
intersection where U.S. 41 North, U.S. 41
East, Ninth Street South and Fifth Avenue
South meet — “is like playing chicken,”
Sulik said.


“I think it’s worth looking into. More parking
would be perfect. There is no parking
here,” said Patty Kirk, owner of Captain
Kirk’s Stone Crabs Inc. in the Fifth Avenue
shopping district.

No specific timeline has been set on the
project, but both council members and
commissioners hope to have detailed
reports ready to present by the summer.
Additional turn lanes would be needed for
through traffic, and signs would be posted
to turn Goodlette-Frank Road into U.S. 41
from Golden Gate Parkway south to U.S. 41
East, Sulik said.

“It’s a need that has to be addressed for
pedestrians, bicyclists and vehicles. A lot of
county residents don’t go to the downtown
area because of the traffic,” said local
resident Michelle Avola, who represents a
coalition of some 3,000 city and county
residents who support the plan.

Other options include better signs directing
traffic destined for Miami or Marco Island
to use alternate routes and pedestrian
overpasses above U.S. 41, officials said.
They said state and federal governments
would have the final say on whether U.S. 41
is moved.
Posted by Darla at 2/10/2011 06:58:00 AM