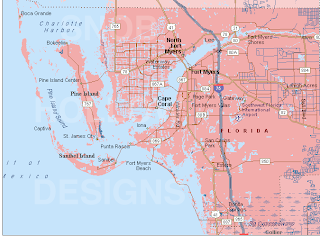 BikeWalkLee has been involved in advocacy on a countywide basis, participating in all the Lee County MPO meetings and committees, and in the Board of County Commission committees and hearings. The MPO is a countywide transportation planning body and includes representatives from each of the local jurisdictions. The BoCC and county government covers the unincorporated portions of Lee County. While the majority of transportation decisions that affect bike/ped/transit facilities and complete streets policies are made in these two bodies, the local jurisdictions (Bonita Springs, Cape Coral, Fort Myers, Fort Myers Beach, and Sanibel) also make bike/ped decisions on their local roads as well as influence decisions on county maintained roads.

Bonita Springs: Sarah Baker, sbaker@bikewalklee.org
• Sarah Baker is a Senior Analyst / Planner with the Lee County Health Department. Sarah grew up in Fort Myers and has lived in Bonita Springs since 2003. She is a Board Member of the Lee County Injury Prevention Coalition and a founding member of Fit-Friendly Southwest Florida. Sarah also leads a troop of Girl Scouts in Bonita Springs. In her spare time, Sarah enjoys rollerblading and ice-skating with her husband and 10-year old daughter Lydia.

Cape Coral: Steve Chupack, schupack@bikewalklee.org
• Steve Chupack has been a year-round resident of Cape Coral since 2003. Steve was a co-founder in 2005 of the Safety on Surfside Committee, which successfully petitioned the Cape Coral City Council to approve new bike lanes in the area. He was elected recently to serve on the Board of Directors of the SW Cape Coral Neighborhood Association. Steve is a former executive with non-profits and the Vermont Agency of Human Services. He is an avid kayaker, cyclist and walker.

Fort Myers: Dan Moser, dmoser@bikewalklee.org
• Dan Moser has been a resident of Lee County since 1973, a resident of the City of Fort Myers for the last 25 years, and has been a vocal advocate for biking and walking during most of his career. He is a founding member of BikeWalkLee and serves on its steering group. He has been a member of the City of Ft Myers Bicycle/Pedestrian Advisory Board since its inception in 1999 and is its current chairman. Dan is also the Program Director for the Florida Bicycle Association, an instructor for Lee Memorial Health System Trauma Center's High Risk Driver Program & Young Driver Program, Lee Injury Prevention Coalition vice chairman, and chairman of Lee MPO Bicycle/Pedestrian Coordinating Committee. He is also a certified bicycle education instructor and instructor-trainer. Dan’s primary mode of transportation is his bicycle.

City of Fort Myers Beach: Carrie Hill, chill@bikewalklee.org
• Carrie is a long-time resident of Fort Myers Beach and an active advocate for biking and walking. She was appointed by the City of Fort Myers Beach to represent the city on the MPO Bicycle Pedestrian Coordinating Committee (BPCC). Carrie bicycles as her mode of transportation on FMB. She is a native Floridian and a homeowner on Fort Myers Beach for 15 years. In addition to being an avid cyclist and scuba diver, she is a published poet, artist, and thespian. Her artwork has been used for the Sand sculpting and Shrimp Festivals. Carrie serves on the Cultural and Environmental Learning Center Advisory Board (CELCAB), which oversees the Mound House, and is President of Friends of Mound House, She is also a long-standing member of the FMB Community Foundation.

City of Sanibel: Tom Sharbaugh, tsharbaugh@bikewalklee.org
• Tom Sharbaugh has been a resident of Sanibel since 2002. He is a member of the Sanibel Bicycle Club, serving as a current board member, communications chair and past president. He created the Club’s award-winning Bike Safety Education Program to increase awareness of safe biking “rules of the road” among island residents and tourist visitors. He is currently leading a community-wide effort to construct a “path welcome center” that will serve as a trailhead for Sanibel’s path system and also provide rest stop amenities for path users. Tom is a former business executive who has managed marketing and communications functions for national companies. He’s an avid recreational cyclist , enjoys kayaking, and returns to the Chicago area during the summers.

Florida Gulf Coast University: Dr. Margaret Banyan, mbanyan@bikewalklee.org
• Margaret Banyan, Ph.D., is a Visiting Assistant Professor at FGCU, and teaches in the Division of Public Affairs in the areas of land use planning, public administration, and political science. She is a member of the FGCU Master Plan Committee. She is a founding member of BikeWalkLee and part of its Steering Group. She is chair of the Lee County Community Sustainability Advisory Committee, and a member of the Lee County Homeless Coalition. Her interests center on sustainability, equity, public transit, and citizen involvement. Before moving to Lee County, she worked at Portland State University as the director of the Center for Public Participation.