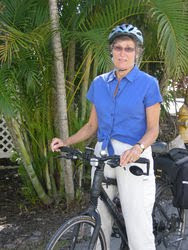 Letourneau among trio of finalists for 2010 Citizen of the Year Award
Island Reporter
by Jeff Lysiak
February 9, 2011

Last Thursday afternoon, the Lee County Board of County Commissioners announced the three finalists in the running for the 2010 Paulette Burton Citizen of the Year Award. They included Darla Letourneau of Sanibel, Deborah Sebastian of Lehigh Acres and B.J. Gerald of Alva.

Letourneau, who helped launch BikeWalkLee, is a community activist who took part in the Complete Streets Implementation Working Group, an active public participant in Community Sustainability Advisory Committee as well as the Metropolitan Planning Organization.

"It's nice to be singled out, but this is really a group effort," said Letourneau after hearing of her finalist status. "Everybody brings their own talents and strengths to the group — whether they're our environmentalists, Smart Growth planners, health and safety advocates, bike clubs and businesses. The cyclists are the most organized; they kind of speak on behalf of all walkers and bicyclists who share the same paths.

As noted in their mission statement, BikeWalkLee seeks to work with local governments, officials and staff to help create a culture of planning that works to complete Lee County's streets so that all users of our transportation networks are considered on the front end of any project or improvement. This effort includes attending and testifying at public meetings to raise awareness of complete streets, analyzing data and legislation to make the case for necessary enhancements and dangerous infrastructure gaps and helping to identify options and opportunities that would enhance Lee County's evolution into a model complete streets community.

Letourneau, a former committee chair for the Sanibel Bicycle Club, has been active with a number of community-focused organizations since moving to the island in 2000. She is a past president of Zonta's Sanibel-Captiva chapter, has been an advocate for the Southwest Florida Addiction Services (SWFAS), a docent for the Sanibel-Captiva Conservation Foundation and a member of the City of Sanibel's Stewardship Committee.

"I feel like I'm still working," said Letourneau, a former federal employee in Washington, D.C. "I've kept my skills up and learned how the process works. It's important to make contributions to your community and help make a difference."

According to Booch DeMarchi, Lee County Special Events Coordinator, the award was created in 1991 to honor Burton, a long-time Sanibel Island resident and "government watchdog." She spent many years serving as a voice of the people to the Lee County Commission, as well as playing an active role in Sanibel politics. She died in an automobile accident in 1991.

The selection criteria for the award includes a "positive attitude, knowledge of the objectives and activities of Lee County government, a demonstrated interest in community/county government partnerships and promotion of harmony between the community and county government," he reported.

The 20th Annual Paulette Burton Citizen of the Year Award will be presented to the winner by the Lee County Commissioners at their Board Meeting on Tuesday, Feb. 15 at 9:30 a.m. in the Commission Chambers at 2120 Main Street in Fort Myers.
Posted by Darla at 2/09/2011 10:16:00 PM