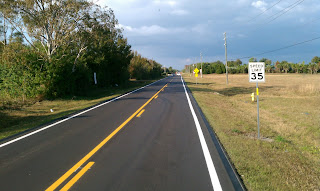 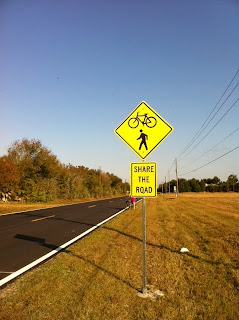 As part of LeeDOT's November 9th report to the County Commissioners on the resurfacing contract, they recommended putting share-the-road signs on Orange River Road, Palomino Road, and Island Park Road. The Palomino Road resurfacing project was completed by the beginning of December and within the past few weeks share-the-road signs were posted. We love the symbols on the signs. Although the road was too narrow to create bike lanes without expanding the road surface, LeeDOT restriped the road to narrow the lanes, which could help slow down the traffic (see photo above). In addition, they also reduced the speed limit to 35 mph. The combination of these improvements should make Palomino Road safer for all road users.

Kudos to LeeDOT for quickly taking these actions to improve this road. We're looking forward to having these safety signs and other improvements on the other two roads being resurfaced, as well as on Fiddlesticks Road (the road opposite Palomino on the other side of Daniels).

I rode Palomino today & not only were the signs up, the Sheriff's office was out in force clocking everyone speeding on the road and pulling them off to give them tickets. Riding the road today felt safer than when I rode it in early December. Thanks to everyone involved!

What's your feedback on this project? If you use Palomino Road (as motorist, cyclists or walker), share your experiences with us. Thanks!
Posted by Darla at 1/04/2011 08:27:00 PM