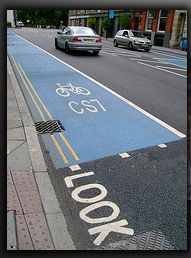 Transport for London (TfL) says studies show a big increase in bike use along two newly-painted Cycle Superhighways. They compared numbers in October 2010 versus the same month in 2009 and discovered an overall increase of 70% more cyclists for both routes.

TfL created the pilot Cycle Superhighways last summer, painting bright blue bicycle lanes to designate preferential bike routes into London. CS3 runs roughly along A13 from Barking, England west into London, terminating near the Tower of London. CS7 begins west of London in the Borough of Merton, following or paralleling A24 before ending at Upper Thames Street at Queen Street.

According to Bike Hub, about 80 percent of the cyclists on the Cycle Superhighways are commuters.