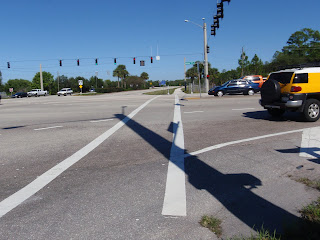 Walkers and cyclists in Lee County know that one of the most dangerous intersections in South Lee is the crosswalk at Six Mile Cypress and Daniels, esp. the southeast corner for those users traveling north on the path along the east side of Six Mile Cypress. Although LeeDOT has tried many different solutions over the past 10 years, motorists traveling north on Six Mile Cypress turning right onto Daniels were still not stopping for the sign "No Turn on Red for Bike/Ped users. Bert Hamilton and others have been working with LeeDOT on improvements. This past week, LeeDOT made some improvements. The lights at Six Mile and Daniels were re-timed for the no turn on red sign, which is resulting in motorists actually stopping at the crosswalk. There are still some issues that need to be tweaked, e.g. when there is no traffic staged to trigger a green arrow, we're back to the same problem.

Let us know your experiences at this intersection with the new change. Thanks to LeeDOT for addressing this issue.
Posted by Darla at 1/06/2011 07:52:00 AM