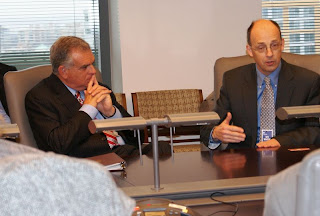 Fast Lane--Secretary US DOT Blog: January 13, 2011
This week, a coalition of bicycling advocates introduced me to a new report showing that in Baltimore, MD, pedestrian and bicycle projects created nearly twice as many jobs per dollar spent than traditional road projects.

In this case-study, "Estimating the Employment Impacts of Pedestrian, Bicycle, and Road Infrastructure," the Political Economy Research Institute compiled data provided by the city of Baltimore. They found that on-street bike lanes and pedestrian measures created more direct jobs, more indirect jobs, and more induced jobs per dollar than either road upgrades or road resurfacing.

That report was followed last week by a survey released by the Centers for Disease Control and Prevention indicating widespread public support--67 percent--in America's cities for street design activities that increase physical activity.

Putting the two studies together creates a powerful argument for continuing the Department of Transportation's support for bicycle and pedestrian infrastructure projects. Even as these investments increase mobility, they also generate economic growth. And, people are demanding them for their communities.

I don't think anyone who reads this blog doubts my enthusiasm for increasing Americans' transportation options. In 2009, in one of my first blog entries, I wrote that "Cyclists are important users of our transportation systems." Since then I have demonstrated my commitment to programs that improve options for safe bicycling.

The reality is that not everyone wants or can afford to own a car. And--even among vehicle owners--some people prefer to get around by public transit. Others prefer to bike or walk. At DOT, we want them to get where they're going safely.

But, as Caron Whitaker of America Bikes said:

Because safety is this DOT's number one priority, that point hit home.

Where does that leave us? How did I respond to these folks?

Well, there's a budget process, and there's a surface transportation reauthorization process--and DOT does not control either. So my message to them was simple: participate in the process.

Bicycle and pedestrian activists have been very successful at achieving valuable safety gains for their stakeholders. Now is the time for advocates of cycling and walking to get into gear once again.

Armed with the powerful arguments of energy conservation, environmental and health benefits, public demand, and--now--job creation and economic development, I am confident they will succeed.
Posted by Darla at 1/13/2011 07:34:00 PM