Join a Ride of Silence event on May 15th

May has arrived and time to firm up your plans to join one of the two local Ride of Silence events (Cape Coral and Sanibel) on Wed. evening May 15th to honor fallen cyclists and promote road safety. Note that the annual Caloosa Rider-sponsored ride is in Cape Coral this year, not Fort Myers.

What began in 2003 in Dallas as a spontaneous outpouring of grief for a friend and fellow rider, struck and killed by the mirror of a passing vehicle, has rolled across the globe to become an international annual event memorializing and honoring cyclists who have been injured and killed while riding.

The Ride of Silence is a worldwide event, with almost all USA States participating, along with 22 other countries. The many hundreds of events share the same goals: "To honor fallen cyclists, to promote road safety, and to make a difference."

Bike safety is not a fleeting issue, especially here in Florida which ranks as the very worst in the nation for cyclist safety, with the highest fatality rate for ten years in a row. In 2018, 3 cyclists were killed in Lee County crashes, while 4 cyclists have been killed in 2019 in just the first 4 months. In 2017, 4 cyclists were killed, while 2016 set a record, with 9 fatalities.


The Ride of Silence, in memorializing riders injured and killed, seeks to draw motorist's attention to cyclist's legal rights to full use of the roadways, to inform motorists that we are here, to watch for us--as if our lives depended on it. Please come out to show your support and send the message that we deserve our right to operate on our own roads. We are not just bike riders, but friends and neighbors and we must all Share the Road.

Locally there are TWO Rides of Silence planned—Cape Coral and Sanibel.

1. The Ride and Walk of Silence 2019 (in Cape Coral)Co-hosted by the Caloosa Riders Bicycle Club and Streets Alive of Southwest Florida

Come join the local Ride and Walk of Silence, co-hosted by the Caloosa Riders Bicycle Club and Streets Alive of Southwest Florida with a City of Cape Coral Police Department escort, through downtown Cape Coral on May 15, 2019 at 7 p.m. The Ride of Silence will depart from the SWFL Military Museum, 4820 Leonard Street, Cape Coral, Florida on a 7-mile slow ride for adults and youth alike with a speed no greater than 12 miles per hour.

The Ride of Silence, in its 17th year throughout the country, is important here in SW Florida. From 2012-2017 there have been over 2655 injuries and 144 deaths related to cyclists and pedestrians on Lee County roadways. Link to map and stats: https://arcg.is/1qTKD0. Recent local tragedies in which a cyclist and a pedestrian were killed on March 25th and April 8th point to the need for the community to come together and participate in this Ride of Silence. 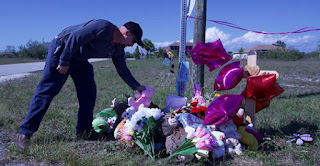 Simultaneously the inaugural Walk of Silence, in partnership with Streets Alive of SW Florida, will take place from the same location to bring further awareness to the lack of safe designs in general within SW Florida for walkers, handicapped including those in wheelchairs, skaters and bicyclists. This inaugural walk specially honors 2 children from our community who have lost their lives on our roads in 2019, Alana Marie Tamplin and Layla Aiken. Streets Alive of SWFL will have a select amount of reflective wristbands and lights for walkers in need. Walkers are encouraged to wear white or neon color shirts, bring a flashlight if possible and wear comfortable/walking shoes. The walk will be 1 mile at a slow pace.

A brief ceremony remembering family and loved-ones who lost their lives while walking or cycling will be held starting at 6:45 p.m., followed by ride protocol and safety instructions, before riders depart promptly at 7:00 p.m. Cyclists are asked to wear a helmet and have front and rear lights on their bike.

Come join us on this important Ride and Walk of Silence on May 15, 2019 through the City of Cape Coral which is working diligently to make our Bicycle Friendly Community safer.

For more information, contact the ride organizer, Megan, at mfasig@embarqmail.com.

2. Sanibel Ride of Silence
Hosted by the Sanibel Bicycle Club in partnership with Matzaluna Restaurant and Billy's Bikes

﻿
The Sanibel Bicycle Club has organized an annual Ride of Silence since 2009. This year’s ride is hosted by the Club, Billy’s Bikes, and Matzaluna Restaurant. Riders are encouraged to arrive for waiver signing and equipment check by 6:45 p.m. at Matzaluna Restaurant (1200 Periwinkle Way).

At 7:00 p.m. promptly the ride will leave Matzaluna's, down Periwinkle Way to the Sanibel Causeway. The ride will cross over the first 2 bridges of the causeway, do the turnaround under the main span, and return to Matzaluna (approximately 7 miles round trip).

Helmets required for all riders and front and tail lights are required if you plan to ride your bike home after dinner.

· Matzaluna will provide discounted food and drink for all riders.