This week BikeWalkLee released a report (based on new Lee MPO data) on new and improved bike/ped facilities throughout Lee County: FY 2010-2014, which updates BikeWalkLee's 2012 report. The county is continuing to make moderate and steady progress towards filling the gaps in the countywide bike/ped network. Over the past 4 years, the lane miles of bike/ped facilities have increased by 130 miles on our major roadways (and by 154 miles if you include local roads), an average of 4.5% growth a year. Much remains to be done, but progress is being made. Be sure to say "thank you" to elected officials and government staff who have made these improvements possible.

Lee County is a large far-flung area, with 804 square miles of land and a population of 679,513 (2014).  There are almost 1,000 miles of major roadways (arterials and collectors) and hundreds of more miles of local roads.  It's sometimes hard to see the totality of new bike/ped facilities that are being added in the county, but progress is happening.
The Lee MPO is in the process of developing its Long Range Transportation Plan for 2040, and is updating its Countywide Bicycle and Pedestrian Master Plan (adopted in 2011) for inclusion in the LRTP 2040 that will be adopted in December 2015.  As part of this process, Lee MPO staff has worked with all the local jurisdictions and FDOT to update its data on the bicycle and pedestrian facilities and now has data comparing the progress in adding facilities, both by jurisdiction and by type of facility, from the baseline year of 2010 through 2014.  Given the use of this report in the MPO's LRTP and the required use of the State Database, the report is limited to all arterials and collectors (known as "federal aid roadways") and does not include local roads (except for Sanibel's shared use pathways, which are included here).  The data is presented in "lane miles" which means both sides of bike lanes and sidewalks counted.

While the mileage of biking and walking facilities on local roads accounts for only 3% of the total bike/ped facilities in Lee County, the exclusion of this data from the MPO datebase means that this report is not totally comparable to BikeWalkLee's 2012 report, which included local roads.  Also, unlike the 2012 report, the new MPO data does not reflect improvements in the facilities, such as widening of shared use paths and installing amenities such as wayfinding signs.  The narrative below highlights some of those improvements. 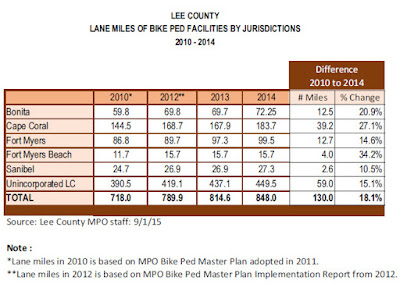 In terms of jurisdiction, 53% of the facilities are in unincorporated Lee County, the remaining 47% are found in the 5 municipalities, with the highest share of those being in Cape Coral (22%). 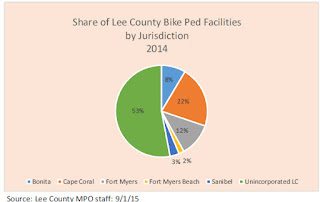 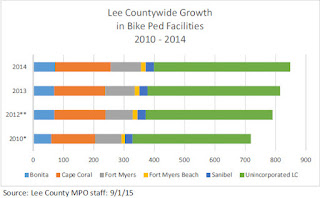 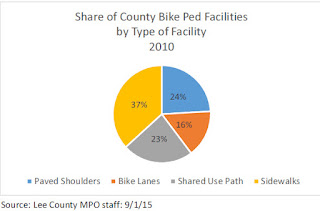 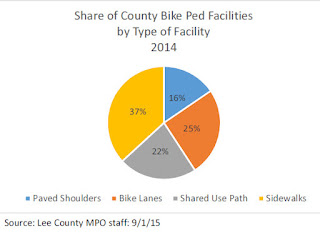 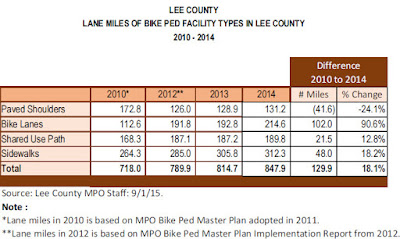 Other improvements:
This total doesn't include important improvements, such as the miles of biking connected with wayfinding signs or widening of shared use paths.  As part of the 2011 MPO countywide bike/ped plan, in 2012-13 LeeDOT completed wayfinding signs on two demonstration loops envisioned in the plan--The Tour de Parks Recreational Loop and the University Loop, with 65.4 miles now connected by wayfinding.  In 2014, as a result of the successful partnership between the City of Cape Coral and the Cape Coral Bike-Ped group, they completed 90-miles of 7-interconnected bike routes, with almost 1500 signs installed, and 13 map kiosks along the routes.

On Sanibel, almost four miles of shared use paths were widened over the past 4 years, which is an important safety improvement not reflected in the MPO data.  In addition, Sanibel added two off road biking trails in 2014 that are not counted in the MPO data--the Pond Apple Park Trail and the Community Park Trail--for a total additional mileage of 3.8 miles.  In 2012, a new Sanibel Path Welcome Center was built as a result of a model public/private partnership led by the Sanibel Bicycle Club.

Simply looking at the number of miles of new bike/ped facilities doesn't tell you the full story of the progress in creating a connected bike/ped network.  For example, in Cape Coral, the construction of 2.2 miles of new bike lanes in 2012, actually resulted in a new 17-mile connected biking loop, since these two small bike lane additions closed the gaps, creating two new biking loops.  Another exciting development was the 2011 completion of Fort Myers Beach's North Estero Blvd.  drainage and road improvement project which fully incorporated a complete streets approach.  The N. Estero Blvd. project is now serving as the model for the larger Estero Blvd. Improvement project getting underway on Fort Myers Beach in 2015 and also as a model complete streets project for other communities in Lee County to consider.

There are other indications of progress not just in the construction of new facilities but in usage of the county's bike/ped network.  As an indication of the value of investments in this infrastructure, Sanibel conducted its second shared use path survey in 2012 and found that during the intervening 6 years since the first survey, path usage had increased by both cyclists (up 56%) and pedestrians (up 77%).

Improvements in 2015 and Beyond

The MPO summary data does not go beyond 2014; however, a couple of municipalities reported their 2015 numbers, so we know that Bonita added 1 mile of sidewalks in 2015; and LeeDOT added 3 miles of bike lanes, and we anticipate that the current tread of steady progress in expanding the biking and walking network has continued in 2015.

More bike/ped facilities are currently under construction or will soon be under construction.  Most importantly, construction is now underway on the Lee MPO TIGER grant Complete Streets Initiative, which includes 11 miles of new shared use paths and 4 miles of new sidewalks, all of which will be completed by the end of 2016. Connecting to the Daniels shared use path system (the existing on the west side and the upcoming new TIGER path on the east side) will be two new shared use paths scheduled to be constructed by LeeDOT--the Fiddlesticks Rd. path (1.4 lane miles) that should be constructed in 2016; and the Palomino Lane path (1.5 lane miles) scheduled to be constructed in 2016-17.

Bonita's downtown redevelopment project is getting underway in late 2015, to be completed by 2017.  This exciting project will make the 1.33 mile downtown corridor a walkable/bikeable/vibrant place with lots of complete streets features, including roundabouts and other traffic calming features.

Sanibel is constructing a new path along Bowman's Beach Rd. to San-Cap, which will be completed by the end of 2015.  Several other path expansion projects are scheduled in the next several years, including a new path at the exit from Ding Darling's Wildlife Dr. back to the path system on Captiva Rd,  with federal grant funds.

The major multi-year Estero Blvd. Improvement Project, managed by LeeDOT on Fort Myers Beach's one and only through road, gets underway in 2015.  This multi-year project is broken down into 6 segments, each 1 mile long, with the first segment beginning construction in 2015.  This project will  bring much needed upgrades in walking, biking, and transit facilities.

In 2015, new sidewalks and bike lanes are being completed on Metro Parkway from Winkler to Hanson Street, plus improvements to crosswalks at the Metro Fowler crossover.

The new bike/ped facilities throughout Lee County reflect a commitment to complete streets (as reflected in complete streets adopted policies by the Lee MPO, the Lee BoCC, the Cities of Fort Myers, Bonita Springs, and Cape Coral), the Lee MPO's countywide bicycle and pedestrian master plan adopted in 2011, and bike/ped master plans that have been adopted in some of the local jurisdictions, such as Sanibel.  Bike/ped master plans will soon be developed for the City of Cape Coral and the Town of Fort Myers Beach, with MPO resources.

At the beginning of 2015, Lee County added its sixth municipality--the Village of Estero.  In future reports, the biking and walking facilities in Estero will be separated out of the Unincorporated Lee County numbers and reported for the Village.

The2011 MPO countywide master plan is currently being updated  and will be incorporated as the Bike/Ped Element of the 2040 LRTP to be adopted in December 2015.  Below are the updated maps of bike/ped facilities through 2014. 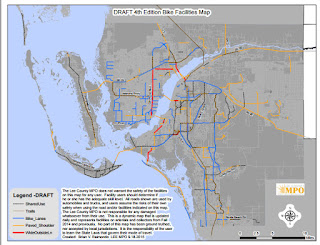 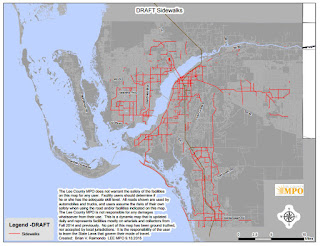 So, take a walk, a run, or a bike ride and explore the new and improved biking and walking facilities across the County.  Be sure to say “thank you" to the elected officials and government staff who made these improvements possible.  Much remains to be done, but progress is being made. Thanks, Lee MPO, FDOT, LeeDOT, and local cities and towns!
Technical Note
The data is presented by geographic location rather than by the agency responsible for the construction project.  Thus, all the projects being managed by FDOT are displayed in the city/town in which they are located.  Likewise, there are some projects managed by LeeDOT because they are county maintained roads located in the independent cities.  They are shown here in the city/town in which they are located.

The mileage is calculated in terms of lane miles, which counts both sides of the bike lanes, shared use paths, and sidewalks (if on both sides of road).  The MPO database only reports on arterial and collector roads, not local roads or bike/ped facilities in parks.  The only exception to this is that the Sanibel shared use path system is included in the database.
Related BikeWalkLee Reports:
BikeWalkLee study: Report on Lee County Funding Trends for Bike/Ped Projects
(Presented to BPAC 12/8/14)