Great to see the News-Press "Share the Road Florida" team being recognized for their contributions to better biking safety.
News-Press Sept. 16, 2015, by Laura Ruane    http://www.news-press.com/story/news/2015/09/15/share-road-florida-bicycle-safety-effort-makes-national-media-magazine/72307112/


The News-Press' Share the Road Florida bicycle safety effort is profiled this week in Columbia University's national magazine promoting excellence in journalism.
Susannah Nesmith, writing for the Columbia Journalism Review, highlights efforts by The News-Press staffers Janine Zeitlin, Melanie Payne and Laura Ruane to inform readers about cyclist deaths and injuries, and to work with the Southwest Florida community to make roads safer for all users. 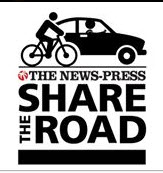 Janine Zeitlin stopped biking on roads six years ago for a simple reason: She’s scared of cars, and not without reason. Zeitlin’s home state of Florida is the deadliest in the nation for cyclists. And Florida’s southwest region, where Zeitlin writes for The News-Press in Fort Myers, is among the more dangerous in the state.
Now, Zeitlin and her News-Press colleagues are trying to change that. The paper has taken on the issue of bike safety, going beyond the typical journalistic goal of informing readers to become advocates in the community and pushing drivers to “share the road.”

The project started in the summer of 2014, when Zeitlin wrote a story about three bad bicycle crashes. Around the same time, she set up the Share the Road community page on Facebook, which invites visitors to join the newspaper’s campaign.
“I was hearing a lot from friends and acquaintances about really awful bike crashes with drivers, some intentional, some just reckless,” she said. “They would get minimal tickets for massive injuries. We looked up the numbers and they’ve been high for the last dozen years or so. It’s spiked upward.” (Zeitlin and I went to graduate school together.)

Editors at the Gannett-owned paper embraced the issue, freeing up writers to dig in. That paid off in a creative piece by Zeitlin in March that crunched five years of data to glean insights about the cause of bike fatalities in Southwest Florida, and a companion package by Zeitlin, Melanie Payne, and Laura Ruane profiling the 12 people killed in bike crashes in the area over a year. In June, another long story by Zeitlin and Ruane focused on places outside of Florida where bicyclists are safer. Other reporters turn in daily stories on new crashes or safety initiatives, collected on a “Share the Road” page on the News-Press site. Last fall, the newspaper also sponsored a “solutions booth” at a community bicycling event hosted by one of the local bike clubs.

The project hasn’t yet prompted legislators to pass new laws increasing the penalties for drivers who hit cyclists, or gotten anyone in government to spend more money on bike lanes. But the effort has raised awareness of the issue and reached beyond the pages of the newspapers.

Online, a community of cyclists and biking advocates has gathered at the Facebook page, which Zeitlin uses to promote the paper’s coverage, aggregate stories from around the web, and highlight things like a project to photograph “ghost bikes”—the bikes of riders who were killed.

And out in the real world, the News-Press campaign has inspired a biking group to raise money to distribute bike lights to people who need them. Local hospitals, too, have partnered with the paper to preach bike safety.

“That was great, because it’s not just us saying it,” Zeitlin said.

Both Zeitlin and Ruane came to the project with strong opinions on bike safety. That comes through in the coverage, whether it’s data-oriented analysis, a series of profiles, or a first-person column.
“One of the things that was really exciting about this project is it came from the reporters,” said Wendy Fullerton Powell, news director at The News-Press.* “We have a group of them that are really passionate about this issue. Lots of times, when reporters have been working on something for so long, they’re ready to move on, but they’re still coming up with new things they want to do.”

Zeitlin, whose title at The News-Press is “storyteller,” and Ruane, who covers transportation and tourism for the business section, both see biking as part of their beats now.

“It’s been an ongoing conversation as opposed to a project in which we do some major stories and it’s over,” Ruane explained. “We’re still talking to people, even people who think cyclists shouldn’t be on the road, period.”

As the paper’s coverage shows, there are plenty of Southwest Florida drivers who aren’t ready to share the road. As the project continues, making sure the conversation extends beyond the biking community will be a priority.

“We need to sometimes be at some event that’s more mixed,” said Ruane. At the bike festival, she said, “We were preaching to the choir there. We need to figure out what event we have that’s broader-based.”

For Zeitlin, being an advocate for cyclists has felt natural.

“You don’t have to be a reporter divorced from humanity,” she said. “I do care about bicyclists getting killed. If I can do something more proactive to stop that, I want to do it.”