Kudos to the Sanibel Bicycle Club for their new program of bike safety messages directed at users of the Sanibel shared use path.  These messages will be appearing around town starting this week. Thanks to Blue Ash Media and all the businesses around town that will be displaying these safety messages. This innovative PSA bike safety approach is something other communities can replicate...thanks to the Sanibel Bicycle Club for leading the way.

The below story appeared in the online Santiva Chronicle. 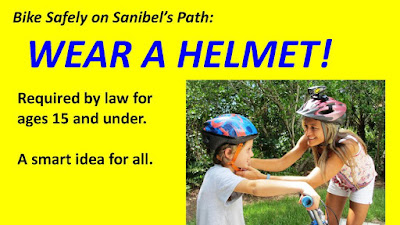 The Sanibel Bicycle Club has announced a new extension of its bike safety education efforts, designed to encourage path users to follow safe biking practices.
The new effort will place safe biking messages on electronic displays in island restaurants and businesses, in partnership with Blue Ash Media Group, Florida’s premier digital media advertising firm.
“Our Club is always looking for new ways to get the word out about how to be safe when using the shared use path, and the new digital displays are a great way to reach people,” Sanibel Bike Club Vice President Patti Sousa said. “We’re delighted that Blue Ash Media has agreed to place these messages as a public service to our community.” 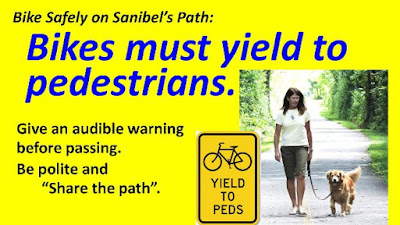 Blue Ash Media’s digital system is currently in place in 14 popular locations around Sanibel and Captiva, where it is seen by a large number of Island visitors as well as local residents. Blue Ash started to run the messages as a public service on Aug. 1
The Sanibel Bicycle Club’s past efforts have included printed materials such as posters and bike rack signs, and more recently a short instructional video titled “Cycling On Sanibel” distributed on youtube.com.
The Sanibel Bicycle Club has designed message slides that will deliver important guidelines on how to be safe when biking on the Sanibel shared use path. Messages include:
Blue Ash Media Digital Advertising Display Locations on Sanibel: