It's exciting to see Bonita Springs moving forward with the Bonita Beach Rd. visioning study that they set in motion a year ago. This project, along with several other initiatives, including the major downtown redevelopment project that will begin construction soon, are bringing complete streets and livable communities to life in SWFL. Kudos to the City Council and staff for their vision and leadership on all these new initiatives that are aimed at making Bonita Springs a place that people want to live, work, and play. Not only will Bonita benefit from these projects, they are serving as a model for others in SWFL to follow.

Background
Back on July 28, 2014, the City Council voted to allocate $100,000 in its 2014-15 budget to hire a firm to develop a vision for Bonita Beach Road  with a focus on livability--bike/ped/transit and aesthetics.  Council also voted to halt continued funding for the next phase of the widening (to 6 lanes) of Bonita Beach Rd. pending the development of this area-wide transportation network vision.

Subsequently, on Aug. 6, 2014, FDOT announced that it would be formally recommending to the MPO Board on Aug. 22nd that its PD and E study currently underway for the US 41 and Bonita Beach Rd. intersection be halted until Bonita's visioning study is completed so that the results of that study can inform the future of this important corridor.  The MPO Board voted 10-4 on Aug. 22nd to suspend the FDOT study.

Bonita Springs City Council has taken an active role in developing this project, including instructions to staff about the RFP to ensure that firms with national experience apply.  As the RFP states, "a national reputation is preferred to raise the level of competition and results". Council also set up a review process to have the competing consultant teams make presentations to the Council and for the Council to serve as the selection board vs. a staff committee.  The RFP, which was approved by the Council on April 1, 2015, was very explicit re: the qualifications and vision for this project. (See agenda pkg p. 91-107.)

Scope of project
According to the RFP scope of work, the goal of the project is to develop "an imaginative and unique vision for Bonita Beach Road" (east of I-75 and west to Hickory Blvd.) and all its major north/south intersections. The proposed vision is to follow the city's Complete Streets policy and use a context-sensitive approach, "using the latest and best management practices that connect land use and transportation needs for all users, including connectivity to adjacent streets, while remaining flexible to the unique circumstances of different streets.  This vision and subsequent design of the Bonita Beach Road corridor would act as the foundation for a comprehensive, connected and well-maintained multi-modal network....It is envisioned that these efforts would lead to a revitalization of commercial development, office development and residential development of varying intensities and densities."

As mentioned in the RFP, Bonita Beach Rd. is a Lee County road and FDOT controls the US41/Bonita Beach Rd. interchange, so both parties will be involved in this project and will be critical to implementation of the project's outcome. 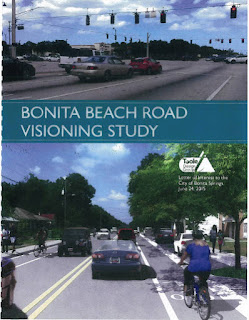 Selection of Toole Design Group
On July 14th, five firms made presentations to the Council.  As part of the process, the workshop was closed to the public, but presentations were video-taped and then posted on the City's website a week later.  The RFP clearly attracted world-class firms with broad national experience and it's worth watching the videos to see the perspective of these firms on the Bonita Beach Rd. corridor.  (click here for access to videos with all 5interviews.) The winning firm was Toole Design Group, and it's well worth your time to watch the video of their presentation.


Watching these presentations gives you an idea of how our communities could be transformed by innovative ways of integrating land use and transportation planning, and by taking a holistic corridor-wide approach.  The focus of the Bonita Beach Rd. visioning project will be to make this a bike/ped/transit-friendly place where people want to be vs. simply car throughput. The presentations also illustrate the value of bringing in the world class experts who have extensive experience in designing these types of projects and then implementing them.


Toole Design Group is one of the nation's leading planning, engineering and landscape architecture firm specializing in transforming roadways from auto-focused uses into complete streets.  They have done high profile street redesigns in Atlanta, Boston, Minneapolis, Seattle, and Washington, D.C.  The team has also worked on numerous Florida corridor projects. They haven't just planned these projects, but have gotten them built.

They also developed the Boston Complete Streets Guide; they authored the Living Streets Manual that came out of LA; they wrote the ASHTO bike guide; the Boston bike/ped guidance which served as the basis for the national NACTO guidelines; and they are the largest Bike Share company in the US.  Toole Design Group has also been designated by the League of American Bicyclists as a Gold-level Bicycle Friendly Community business. 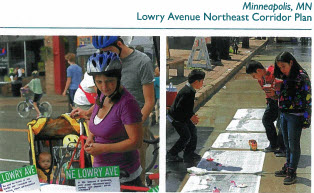 
Next Steps
The next step is for the city staff to negotiate a contract with Toole Design Group.  Hopefully, the project will be ready to begin in the early Fall, and will involve extensive public engagement.

BikeWalkLee is excited about the synergy that is occurring in Bonita Springs from all the projects and initiatives underway --from the City's Complete Streets policy adopted in Oct. 2014, to the major downtown redevelopment project which will begin construction this Fall, and this Bonita Beach Road visioning project; along with their participation in the USDOT Secretary's Mayors Challenge for bike/ped safety, their participation in the Bicycle Friendly Communities national visit in January, their revisions in road impact fees to make their use more multi-modal, along with discussion of mobility fees; and their discussions about future participation in the Blue Zones initiative currently underway in Naples.

Kudos to the City Council and staff for their vision and leadership on all these new initiatives that are aimed at making Bonita Springs a place that people want to live, work, and play.  Not only will Bonita benefit from these projects, they are serving as a model for others in SWFL to follow.  BikeWalkLee will continue to track these developments closely and keep our network informed about opportunities for community participation in the development and implementation of these plans.


BikeWalkLee is thrilled to see the Bonita Springs City Council's efforts in support of complete streets and a livable community vision being recognized by News-Press in its annual awards competition.

BikeWalkLee Blog August 26, 2014: BikeWalkLee calls for comprehensive transportation planning at Aug. 22nd MPO Board meeting
At the Aug. 22nd Lee MPO Board meeting the Board debated at length whether to proceed with a study that would include examining a possible flyover option at the US 41 and Bonita Beach Rd. intersection.  After extensive public comment, including comments by BikeWalkLee, the Board voted 10-4 to suspend the FDOT study.
BikeWalkLee Blog August 10, 2014: Recent developments in Bonita Springs signal support for complete streets and livable communities vision
In the past two weeks there are been several game-changing developments in Bonita Springs that are good news for complete streets advocates.