Thanks to everyone who attended last night's Cape Coral open house, hosted by Public Works staff, to discuss new bike lanes on Cape Coral Parkway, between Sands and Agualinda. This new one-mile link would connect the existing Team Aubuchon Route and Chamber Route on the 90-mile biking route system. Staff emphasized that the bike lanes and new sidewalks would greatly improve safety for both bicyclists and pedestrians.  Below are links to the media coverage (NBC-2, ABC, and Fox).  Thanks to Cape Coral staff and the Cape Coral Bike-Ped group for all their work on this proposal.  Next stop...City Council for approval.  We'll keep you posted. 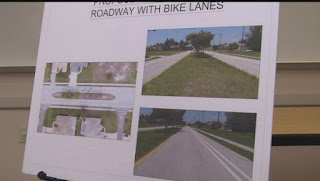 The City of Cape Coral has 90 miles of bike paths, but it could soon be 91.
Wednesday night, the city held an open house on a proposal to build bike paths along a mile-long stretch of Cape Coral Parkway.
- VIDEO: Cape Coral residents get details on new bike path
"I turned around and I think it's a really good idea for the Cape," says Suzanne Treichler. She showed up to the Cape Coral Library for the open house against the idea of building the bike paths.
After hearing the benefits however, she changed her mind.
"It provides recreation, and it may actually provide a way for kids to get to school using their bikes. I think it's a really positive idea for southwest Cape."
The path would run along the parkway between Agualinda Boulevard and Sand Parkway, at the cost of $15,000.
It would require narrowing the road from four lanes of traffic down to just two lanes.
"I think biking is wonderful, I'm a biker, but just not on the main arteries," says Steven Slosburg, who owns a furniture business along the road. "The reality is there is too much traffic to ride on that street anyway."
He believes building more bike paths along quieter side streets is the better solution. "I can't imagine they would consider doing it on Veterans Parkway, so why would they consider doing it along Cape Coral Parkway."
Officials say they have done traffic studies on the area, labeling it suitable for two less lanes of traffic, and one new lane for bikes.
"It's been something that citizens over the years have expressed a strong interest in," says Steven Neff, Public Works director for the City of Cape Coral.
If the project is approved by city council, Neff says they plan on having the bike paths completed by the end of the year. 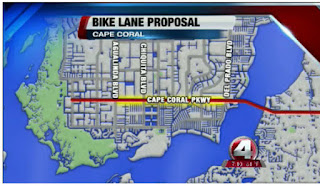 Bike enthusiasts and people living around Cape Coral Parkway were able to voice their opinion Wednesday on a new city plan.
A proposal would add a bike path to one of the Cape's most popular roads, but it would also take it down from four lanes to two.
It's an idea that's been in the works for almost four years. After Wednesday's open house, that idea is one step closer to reality.
Victor Mabry cycles 15 miles a day. "If the resolution passes, I would feel much safer about my ride on Cape Coral Parkway."
He said Agualinda to Sands Boulevard is the only strip that doesn't have a path.
Mabry says, "On this stretch of my ride I look behind, over my shoulder a lot. More than I do elsewhere."
Mabry lives just down the road. His one concern is traffic.
Andrea Glaeser isn't worried about it. "Really the traffic is ending at the corner of Chiquita."
The city did a study to figure out what the lane reduction would mean, and it turns out not much.
This patch of the road gets about 420 cars in the peak hour. That's considered low to moderate for four and two lanes.
Mabry thinks fewer lanes might make this the road less traveled.
"For folks who see it as a shortcut or whatever, you're cutting it down to one lane," Mabry adds, "that might deter some of the pass through traffic."
Glaeser believes fewer lanes would make Southwest Florida's largest city even more family friendly. "I would like it for the kids when you have an extra lane."
There are still a couple of steps in order for this to happen but if all goes as planned, construction should start in December.
FOX News article Cape Coral Parkway bike lanes to be discussed Wednesday