The March 12th ULI workshop, All Eyes on Estero, demonstrated the importance of complete streets--a walkable/bikeable/transit accessible healthy community--to the future of Estero.  The forum received good coverage from both Naples Daily News and News-Press.  Below are excerpts from the news coverage.  Thanks to ULI, ECCL, and FGCU (all BikeWalkLee supporter organizations) for organizing this event.


ESTERO — Imagine walking school buses and musical stairs.
They’re just two ideas presented Wednesday at an Urban Land Institute-Southwest Florida forum that could make Estero a healthier place to live.
The buses are actually parents who walk a route, meeting up with kids along the way to get them safely to school by foot. The musical stairs look and sound like piano keys, making them a fun alternative to an escalator. Both are innovative ideas that have worked elsewhere, encouraging more people to walk. 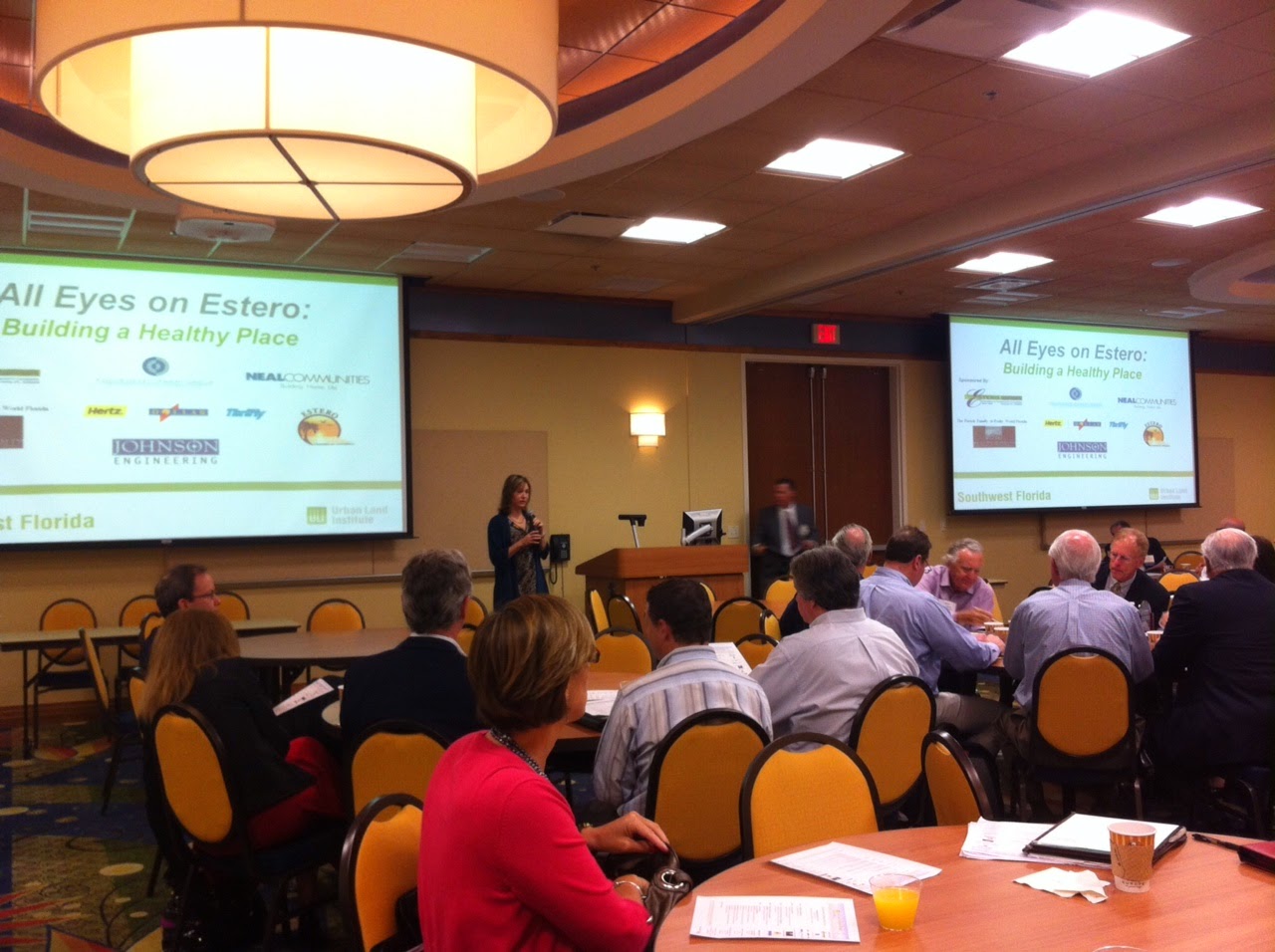 But changing the health of a community will take more than just a few projects. It will require more awareness and a change of thinking, with a buy-in from the community and its developers, said Ed McMahon, a senior fellow with the Urban Land Institute in Washington, D.C., who spoke at the event, held at Florida Gulf Coast University, south of Fort Myers.
The institute has hit the road, traveling from one community to another to try to promote healthy thinking in projects and places across the globe. The institute’s board voted in January to make healthy communities a focus and theme for the organization.
“Health, it’s obviously a global issue,” McMahon said. “It’s affecting communities all over the world.”
He pointed to the air problems in China, then singled out the U.S. for spending more on health care than any other country, for ranking 51st in the world for life expectancy, and for its high obesity rates. There’s evidence your ZIP code can affect you more than your genetic code when it comes to health, McMahon told the crowd of about 75.
For decades, planners and developers have designed places more for cars than people, resulting in long commutes and a sea of parking. McMahon showed pictures that made the group laugh, including a driver walking his dog from a leash hanging out of a car window.
“If we design a community around cars, we get more cars,” he said.
After presenting the 10 principles for building healthy places, from putting people first to designing with a focus on physical activity, he moderated a panel discussion with community leaders and other stakeholders.
Don Eslick, chairman emeritus of the Estero Council of Community Leaders, talked about the need to make Estero more friendly for walkers and bikers, saying the number of bikers in the community had probably tripled in the past five years.
He also emphasized the need for a hospital to serve the community’s aging population. Nearly 40 percent of the residents in Bonita Springs and Estero are 65 and older, he pointed out.
Other panelists talked about the need for a greenway trail for walking, biking and kayaking, and for changes to the local land development codes to promote more mixed-use projects that combine residential and commercial development.
Stacy Revay, a planning project manager and bike/pedestrian coordinator for Collier County government, lamented the vast expansion of roads in Estero, especially the six-laning of U.S. 41.
“Adding more lanes is not congestion management,” she said. “It just encourages more and more traffic. Look at all the asphalt.”
Neil Noethlich, a founding member of the Estero Community Planning Panel, brought up the “density” word, saying that in many people’s minds it’s a bad word. That needs to change for Estero to become a more walkable, bikeable and healthy place, he said.

Click here to continue reading the article and to see the list of 10 principles for building healthy places. 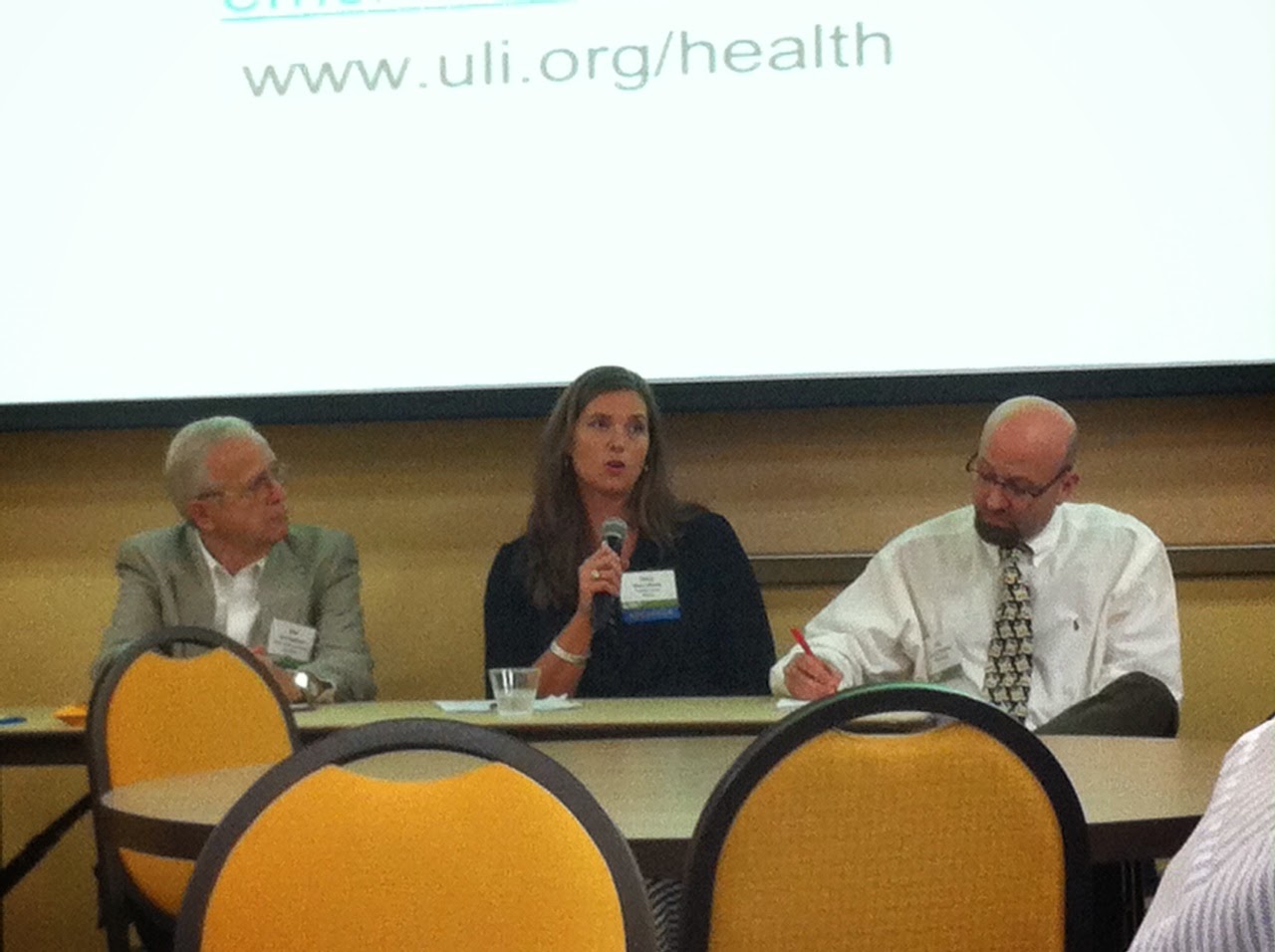 “We have created an environment in Southwest Florida where driving is the easy choice,” said Stacy Revay, a Collier County planning project manager. “Look at all the parking we have. It’s like a land of asphalt. Sure, one day of the year the Walmart parking lot is packed. But on most days, it’s empty.

“So how do we utilize the buses we currently have and create a rapid bus system? The buses have to be timed accordingly because until that happens people won’t take it.”

Revay was one of several Southwest Florida community leaders who discussed the south Lee County community’s future at an “All Eyes on Estero” forum at FGCU. Estero leaders are meeting with land owners to make sure their future developments are compatible with residents’ needs. Estero residents such as Nancy Berkinshaw-Cohen want more green spaces and more opportunities to walk to shops and restaurants.

Ed McMahon, an Urban Land Institute senior fellow from Washington, D.C., argued Wednesday one’s ZIP code — proximity to parks and green spaces — has a greater impact on health than one’s genetic code.
“Walking can be a miracle drug,” McMahon said. “For years in Florida we spent millions for golf courses and millions to maintain them, but all along people wanted biking trails and walking trails.”

Berkinshaw-Cohen lives on U.S. 41 across from the Coconut Point shopping complex. Instead of walking across the six-lane, heavily congested road, she drives.“U.S. 41 is so daunting to cross,” Berkinshaw-Cohen said. “I don’t know how you can solve that.”

Lee County could look into pedestrian bridges, but the lanes are so large the chances of that happening are slim, Revay said. Revay and Joe McHarris, a member of the Estero Design Review Committee, believes Lee County’s land development code must change.

At build out, Villa Palmeras will have 110 paired villa homes on 34 acres. Estero Place will have 102 single-family homes on 53 acres.

“Our No. 1 request from residents is walking and bicycling,” Greenberg said.