Lots of great “take-aways” for Lee County from the August Lee MPO Board Sarasota presentation, along with very encouraging update from Division 1 Secretary Billy Hattaway on actions being taken by FDOT to further support Complete Streets and improve related innovative designs and policies. Note plans for September Peer Exchange.

At the August 16th Lee MPO Board meeting the Sarasota County team made an excellent presentation about their Honore Blvd. project as part of Lee MPO’s series of Peer Exchange. As described in an earlier blog, instead of widening the road to be a 6-lane highway as originally planned, they changed it to be a multi-modal two-lane corridor with six roundabouts.
This presentation was the second in a series of "Peer Exchanges" by the Lee MPO Board to learn from other communities' experiences as the MPO begins the process of developing its 2040 Long Range Transportation Plan (LRTP).  This informative series not only benefits the MPO Board, but also provides an excellent opportunity for staff and citizens throughout Lee County to be a part of the conversation.

The series was kicked off at the June MPO Board meeting with a presentation by the Executive Director the Nashville MPO, about the award-winning and visionary transportation plan developed by the Nashville area MPO in 2010, followed by a lively discussion with MPO Board members.  Click here for highlights from the Nashville discussion.
Sarasota Senior Staff Aug. 16th presentation on Honore Ave. Extension Project

Jim Harriott, Public Works Director of Sarasota County and Frank Domingo, lead engineer for Stantec, the project consultant, presented a road project that to date, is one of a kind here in SW Florida. 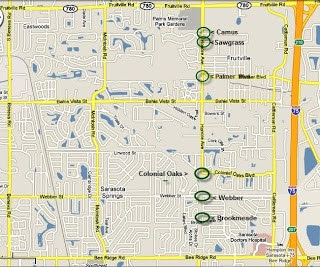 Click here for background on the project, including an excellent video.

Since the early 1990’s Honore Avenue had been planned as part of what was considered an essential north-south, trans-county, I-75 reliever, arterial.   It was to be a typical 6 lane thoroughfare, coursing directly by residential areas, but serving primarily commuters only passing through.

Area citizens were concerned about the degradation of their neighborhood that would be left in the wake of a wide, high speed, bisecting thoroughfare. The loss of acres of forest land, including many large trees that create a natural shade canopy, and the endangerment of children traveling to and from the elementary school added to the concerns that led to the petition against the project, effectively stalling it, while asking county engineers for redesigns. The county engineers agreed to reduce the plans to a 4 lane road, but again were met with citizen resistance.

At this point, rather than remain in opposition to the citizens in the project area, Sarasota County Public Works staff did something quite remarkable, they asked the following important questions:

Traffic modeling indicated that a 4 lane road was needed to provide the fastest commute time and that a reduction to a 2 lane road would increase travel time during the evening peak-hour commute by 2%-3%, or a few extra minutes. Future roadway design for Honore became a clear choice between the single goal of minimizing commuter travel time by a few minutes vs. the long-term quality of life in surrounding neighborhoods and massive reduction of environmental impacts by creating a “context sensitive” roadway that better fit the community.

The engineering team led the way in getting the County Administration and Commissioners, who had previously approved the traditional road project, to rethink the entire project idea. Out of this fresh approach evolved the 2.7 miles of new and rebuilt roadway that exists today.

Completed in November of 2011, the project won an American Public Works Association award for its “purposive effort of minimal local intrusion to protect the surrounding neighborhood character”.
Subsequent analyses of this road project indicate that traffic, now at nearly 90% of traditional capacity, moves at a lower (and safer) speed than is typical, but because of the roundabouts it moves steadily without the stopping and starting of traffic lights and there have been no serious accidents.  The reduction in road width saved tax payers approximately 16% over that of the 4 lane design and most recent real estate publications indicate an increase in property values in the neighborhoods adjoining the road and its park-like natural landscaping.

After the presentation to the MPO Board, Lee County Commissioner Frank Mann noted the close similarities between the Honore Avenue project and our county’s Ortiz Avenue project. He suggested that this new model could be used on Ortiz rather than the current DOT planned wider road opposed by the Historic Tice Community Planning Panel.

Dr. Margaret Banyan of FGCU, a member of Bike Walk Lee and the Tice Community spoke to the parallel nature of the two projects and her community’s desire for similar consideration in the development of an appropriately “context sensitive” improvement plan for Ortiz Avenue.

Ann Pierce, a BikeWalkLee Steering Committee member spoke of her experience on Honore Blvd., conveying what a pleasure it was to drive even during morning and evening rush hours, citing the “uninterrupted flow of traffic until one approached the traffic light at Fruitville,” an experience echoed by Public Works Director Jim Harriott, who reported that area drivers consistently indicate a preference for driving this roadway over others within the grid system.

BikeWalkLee extends their thanks to the Sarasota team for their time and graciousness in sharing this exciting project – a truly improved, multi-modal, light impact and sustainable roadway.  We also extend and thanks to the MPO team for bringing such an excellent presentation to Lee County.

·         The selection of the new state level Bike/Pedestrian Coordinator,
·         A focus this fall at community level bike/ped safety plans,
·         A focus on state level complete streets initiative,
·         Implementation of road diets without mandating that the roads be turned over to localities,
·         Context sensitive policies, particularly for bike/ped. Evaluating each situation’s unique aspects and designing bike facilities to fit,
·         Reevaluating prohibitions on mid-block crosswalks,
·         Encouraging the use of roundabouts at intersections, and
·         Tip cards will be provided to law enforcement personnel to simplify and explain the enforcement of the rules of the road regarding both driver and pedestrian behavior at crosswalks.
Next Peer Exchange September 20th: Broward County

At the Sept. 20th Lee MPO Board meeting, a team from the Broward County MPO will do a presentation about their innovative LRTP, which includes a policy of no more roadway capacity expansion with a shift to transit and bike/ped, and their newly adopted Complete Streets program.