BWL Column: Shake up your routine on this new route

This route (as well as the Tour de Parks spotlighted a while back) sprang from the countywide bicycle-pedestrian master plan developed by the Lee County Metropolitan Planning Organization out of a desire to provide some demonstration routes to encourage more biking and help connect the existing bike/ped infrastructure together in a more functional fashion. The county’s Department of Transportation has picked up this effort, developing the route maps (such as the one shown here), designating the bike lanes and installing wayfinding signs to help orient riders to distances and directions. 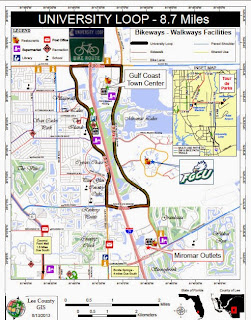 Lee County staffers have developed an annotated map of the University Loop (including some of the nearby amenities and facilities). Download it from the BikeWalkLee website, bikewalklee.org.

The sign identifies the University Loop.
Florida Gulf Coast University and two shopping centers are along the way.

Looking for a safe-riding route in the southern part of the county? Try the University Loop.
This 8.7-mile route parallels Interstate 75 on both sides — using Three Oaks Parkway to the west and Ben Hill Griffin Parkway to the east — crossing at the north on Alico Road and at the south on Estero Parkway at Don Eslick Bridge. Bike lanes throughout with a mix of sidewalks as well make it a good route for riders who don’t want to mix it up with traffic very much, although there will be intersections that require attention and a little patience (just as they demand from motorists).
Touching a half-dozen communities and with easy access from numerous others — including most of San Carlos Park — this should be a popular ride for nearby residents. Not only will that mean you’ll have company, but it’s also good for biker awareness — there’s safety in numbers, and drivers tend to be more aware of cyclists when they see them on the same routes regularly.
The loop also passes by Florida Gulf Coast University (hence, its name), so riders can add that in for a quick side trip. (You’ll have to ride on the sidewalk or roadway to get into the university, since it only has bike lanes on the inner loop.) On the west side, you’ll pass by Three Oaks Park, a good place to start, take a break or watch other sports in action (since the park has a lot of courts and fields to use).
There’s also direct access to one shopping center (Gulf Coast Town Center) and another (Miromar Outlets) is close by. If you really, REALLY need to get your shop on, Coconut Point Mall is about 2 miles away from the southernmost section of the loop — but remember that shopping by bike can put a damper on how much you buy (or at least carry home).
Also remember that, if you’re riding in shopping centers, they often are filled with people not paying attention to you (but bicyclists should be used to that). Ride defensively, and be sure to yield to pedestrians — if you’re rolling, you’re a vehicle and those rules apply.
To use the loop as a jumping-off point, or to ride from your usual haunts to try it out, you’re close to plenty of other bike infrastructure and communities:
• To the north, it’s about 4 miles to Daniels Parkway via Ben Hill Griffin Parkway/Treeline Avenue, passing by the airport. That ties you in to the Tour de Parks loop as well.
• To the south, Bonita Springs is about four miles away via Three Oaks and Imperial parkways.
• Heading west, Michael G. Rippe Parkway (the Metro Parkway extension) and U.S. 41 are between 2.5 and 3 miles away on Alico Road. If you take Estero Parkway, U.S. 41 is less than 2 miles away.
• Heading east? Good luck. Alico Road will loop back into Corkscrew Road, but neither are for the faint of heart (or weak of leg). 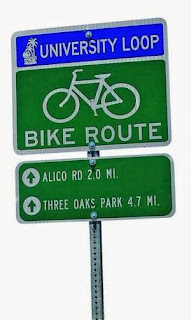