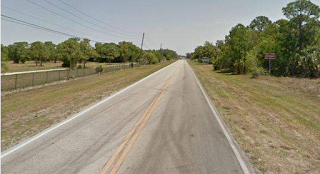 Thanks to the Bonita Springs City Council for starting conversation with Collier County about the need for sidewalks and/or bike lanes on the southern section of US 41. Do you live out that way and want these facilities?  Get involved!

Bonita Springs leaders met today at City Hall with a Collier County representative to discuss the possibilities of adding sidewalks and/or bike lanes to Old 41 Road between Bonita Beach Road and U.S. 41 in North Naples.

"It is probably one of the most dangerous roads around mainly because there's no sidewalks, no bike paths, no nothing," Bonita Mayor Ben Nelson said. "I can't tell you how many times I've seen people riding their bikes down the middle of the road."

Possibilities including building a temporary sidewalk or widened shoulders, since the road is slated to eventually be widened to four lanes.

"All we did is share the questions. We didn't really share any answers because none of us had any," Nelson said. "This is just a start in the process of communication with the county.
"At some point we hope to take it a little further."

Nelson said drivers as well as bicyclists and pedestrians will benefit. "It keeps it safer for the automobiles, too, because you're not having to swerve or dodge around people riding a bike. People who want to walk, jog - there's a place for them to do it," he said.

"Every place that we have done a bike path or a sidewalk, it has paid incredible dividends. The neighborhood has immediately looked better. People use these sidewalks and bike paths."
Bonita's 2012-2013 budget includes $400,000 for residential sidewalk/drainage on Old 41 between Bonita Beach Road and the Collier County line.
Posted by Darla at 11/19/2012 08:07:00 PM