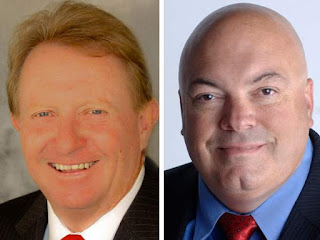 BikeWalkLee welcomes Commissioners Larry Kiker and Cecil Pendergrass.  We look forward to working with our new commissioners in support of complete streets and a balanced multi-modal transportation system.

Both new members have voiced support for BikeWalkLee's mission in response to our candidate questionnaire and in meetings with our team.  Chairman Pendergrass was a former police officer which means he is well aware of land use and road condition issues that affect the safety and well-being of residents and visitors.  Commissioner Kiker was the Fort Myers Beach Mayor during the Town's construction of the model complete streets project on N. Estero Blvd. and also initiated the recent pedestrian safety task force.

Many challenges will face the Board in the coming months and we look forward to working with the Board in support of complete streets and a new transportation paradigm.
BikeWalkLee would like to thank outgoing commissioner, Ray Judah, for his unwavering and strong leadership in support of complete streets over these past four year and for his support for bike and pedestrian concerns over his 24-year tenure.  Commissioner Judah spearheaded the Commission's adoption of its award-winning 2009 Complete Streets Resolution.  As the MPO Chairman, he facilitated adoption of the 2009 MPO Resolution and championed the development of the MPO countywide Bicycle and Pedestrian Master Plan.   He also was BikeWalkLee's inaugural "Complete Streets Champion of the Year" in 2010.  His contributions to completing the streets of Lee County leave a lasting legacy for the Lee County community.