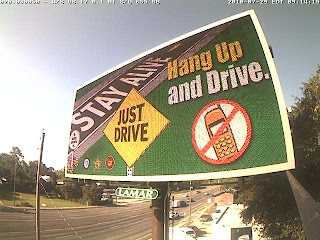 BikeWalkLee was saddened to read the news today that one of our partner organizations, Stay Alive...Just Drive! is ceasing operations this month. SAJD and its tireless leader, Jay Anderson, have led the fight against distracted driving in SWFL. The community owes a great debt of gratitude to Jay Anderson for his contributions to bringing public awareness to this issue. On behalf of BikeWalkLee, we thank you for your service to our community and for being so supportive of our efforts. The campaign against distracted driving must continue.

Stay Alive…Just Drive, which implores drivers not to use phones or be distracted while motoring about their lives on Southwest Florida roads, will cease most of its operations at the end of the month. The organization’s website will remain active.

Executive Director Jay Anderson has been frustrated by his efforts to raise money for the nonprofit, which he said takes a minimum of $30,000 per year to operate. “Like any business, if you don’t have any customers, you have to call it quits,” said Mr. Anderson.

In a nutshell, his message is that distracted driving causes violent traffic crashes. It’s been his life’s work since his wife, while on foot, was sideswiped by a driver using a cellphone. Although his wife recovered from her injuries, the time and resources he poured into Stay Alive…Just Drive took a toll on their personal life as well.

During those last five years, the former EMS captain’s colorful truck, billboards, bumper stickers, and his presentations to schools and other groups, have become familiar about town. Among other measures to stop distracted driving, he works in partnership with law enforcement, the court system and other agencies, and developed an education program.

“Since 2006, we have been actively and aggressively educating the public regarding the dangers of unsafe and distracted driving,” Mr. Anderson wrote in an e-mail. “Believing I could make a difference has exhausted my savings, cost me my marriage, home and is now on the verge of claiming my pride.”

“Stay alive, just drive” has been his mantra both before and after distracted driving became a national news story, and the Department of Transportation began its own campaign to warn the public that it’s not safe to use a phone while you drive — not to mention eating, grooming or lovemaking. News stories have dramatized some of the worst tragedies that sprung from, particularly, texting and driving.

“In 2010, 37,788 people in the U.S. died on our roads,” Mr. Anderson said. “That’s the equivalent to 90 people a day dying in a plane crash. If such a tragedy were to occur, we would quickly find a solution and end the carnage. So, why is it acceptable for that many people to needlessly die in traffic crashes that are preventable? Everyone knows someone who has been affected by a crash, either by being injured themselves, or through suffering a bereavement or serious injury to a family member or friend.”
Posted by Darla at 9/15/2011 10:05:00 AM