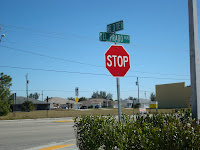 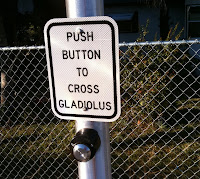 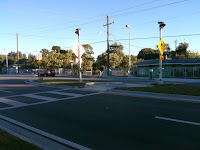 Background:
On April 27th, a 13 year old child was struck and killed by a car while attempting to cross Del Prado Blvd. south of NE 3rd Terrace (at Burton Park) on his bicycle. The intersection at this location does not have any traffic signals or crosswalks (see 1st photo above). BikeWalkLee and others have urged LeeDOT to make improvements at this location to enhance pedestrian safety. In August, LeeDOT completed its study and has recommended only one improvement at this location: modification of the existing median openings on Del Prado Blvd. in this area. LeeDOT is scheduled to present its report and recommendations to the Cape Coral Transportation Advisory Committee on January 19th. Since this traffic operations issue is multi-jurisdictional, it was placed on the agenda of the MPO’s TOCC (Traffic Operations Coordinating Committee) on 12/7/10 for discussion.

BikeWalkLee Request: On behalf of BikeWalkLee, Darla Letourneau commented at the TOCC meeting that LeeDOT’s recommendation to modify the existing median openings (add directional openings, reconfigure existing openings) is a good idea. It would provide a refuge for crossing, and limit the amount of conflicting movements at each opening, which would help pedestrians, bicyclists, and motorists by giving each a few less things to worry about. However, this treatment by itself is insufficient to address pedestrian safety at a location that is directly across from city playing fields at Burton Park. She recommended the following additional improvements and actions:
1. Cautionary playground signs should be installed (and maybe even a brown sign with the name of the park itself), with a yellow speed placard attached to remind them of the speed limit.
2. A Pedestrian Warning Flasher (standard ground mounted), like the one just installed on Gladiolus Drive in Harlem Heights, be installed at this location. (see the 2nd and 3rd photo above.) A warrant is not required to install this equipment. This type of flasher should be considered for other intersections near schools or parks where children are at greatest risk crossing busy roads.
3. The speed limit on De Prado (6 lanes) in this area is 45 mph, with cars often going 50-55 mph. Serious consideration should be given by LeeDOT to find ways to lower the speed limit in areas with large concentrations of children playing, whether near schools or near parks frequented by children. This is a problem throughout the county and a plan needs to be developed for instituting traffic calming features in these kind of locations.
4. While BikeWalkLee had recommended that the county consider either the Enhancer or HAWK traffic signals for this location, the counts didn’t support a warrant. However, these surveys were done in June. She requested that the county consider redoing the surveys in season, as they suggested in their report.

Next Steps: LeeDOT is scheduled to present its report and recommendations to the Cape Coral Transportation Advisory Committee on January 19th. LeeDOT will listen to comments by the Cape Coral City Council, but the decision re: what action to take rests with the County, since this is a County road.

Action Alert: If you are interested in seeing pedestrian improvements at this intersection on Del Prado, plan to attend this Jan. 19th meeting (9 a.m. in Cape Coral city hall), and make your views known.
Posted by Darla at 12/10/2010 08:00:00 PM