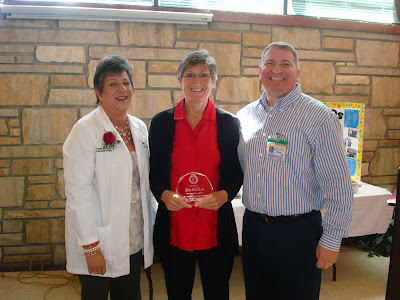 At the December 15th 2010 Annual Awards Event by Lee County Florida Injury Prevention Coalition (IPC), BikeWalkLee was named the "Injury Prevention Organization of the Year", and Darla Letourneau accepted the award on behalf of the organization.

The award statement read as follows:
Since BikeWays Lee County, our community's first cycling advocacy group, vanished when its leader left the bicycling business, we've been without an organized voice to fight for better conditions for pedestrians and cyclists. Then, about two years ago, and after more than twenty years since the demise of BikeWays Lee County, BikeWalkLee has emerged, only this time as a coalition similar to IPC.

Since coming together, BikeWalkLee has had what could only be called resounding success. From major transportation policy reforms at the various local government levels, to projects that are on the ground, the coalition approach has made significant progress in moving Lee County and Southwest Florida towards routinely having complete streets that accommodate all users.


Thanks to each of you--the individual advocates and supporter organizations, government staff and officials, and concerned citizens--for being part of this effort. Commissioner Ray Judah was the guest speaker and thanked the coalition and all its partners for their contributions to the Lee County community. A special thanks to IPC for this recognition and for their 15-year effort to create a safe community in which to live, play, and work.

Below are other IPC 2010 award winners: