Saved by my helmet! 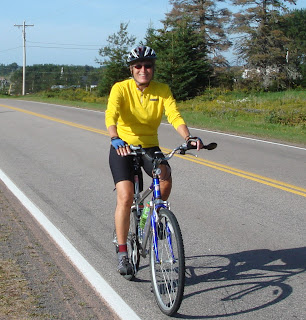 Saved by my helmet!
If you ever doubted the importance of wearing a helmet at all times while biking, believe me, it can save your life. I am a daily rider on Sanibel's paths and am very focused on safety as one of the leaders of BikeWalkLee, a community coalition working to make Lee County a bike/ped-friendly community. On Sunday, August 8th, I was on a bike ride around the island and over the Sanibel bridges, then back on Sanibel coming down the path on Periwinkle Way when I had a nasty bike crash. I came around the curve on the path right before the crosswalk on Donax and Periwinkle, and saw a car coming towards the crosswalk at full speed, so I slammed on my brakes to avoid getting hit by the car. Unfortunately, I managed to flip over my handlebars head first, landing with full force on the back of my head. If I had not had my helmet on, I would have had a serious head injury. Instead of a debilitating injury, I just have some lacerations and stitches. The Sanibel Police, EMS, Fire Department and then the Health Park emergency room all responded quickly and made sure I was OK.

So, next time you hop on your bike on Sanibel, remember my story and wear your helmet...even in off-season and even on a short neighorhood ride. Yes, even on Sanibel wearing a helmet can save your life!

As I was counting my lucky stars this week, I read the August 12th Island Reporter article, "Bike riders after dark safety risk to walkers," and realized there are really two take-away messages from my crash. In addition to encouraging everyone to wear a helmet while biking, all of us need to be reminded that pedestrians and cyclists have the right-of-way at crosswalks. Over the past 10 years that I've lived on Sanibel, I've noticed an increasing lack of compliance with this law. Whether it's a function of our culture's growing lack of common courtesy or our increasing distraction while driving with cellphones, the fact is that residents and visitors alike don't yield to pedestrians and cyclists in the crosswalks like they used to. I cross Periwinkle at the Dixie Beach intersection several times a day on my bike and I'm amazed that it often takes 3-4 cars before a motorist will yield to me in the crosswalk...and I'm not shy about asserting that I have the right-of-way. Most cyclists and pedestrians on the island would tell you they've noticed the same trend. It would help if there was some periodic enforcement of the crosswalk laws by the Sanibel Police. Since there's no penalty for not yielding, cars have gotten more and more in the habit of "running the crosswalk". For a pedestrian or cyclist that's akin to having a car run a red light. But the problem isn’t simply a matter of enforcement. Every one of us has a responsibility to follow the laws that are intended to keep all of the road and path users safe.

Our path system is an island treasure for both residents and visitors and safety should be a top priority. So, please, when you're driving around Sanibel, yield to the pedestrians and cyclists at the crosswalks...it's the considerate thing to do, it's the law, and it might just be your friend, neighbor or grandchild. And don’t forget to tell everyone to wear a helmet when they’re riding a bike!