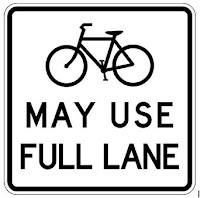 Yet another indication of our auto-centric community and the lack of understanding of the law....how dare the cyclists be in the road! and on Fiddlesticks Blvd where there is NO path or sidewalk so what were the cyclists supposed to do?? What happened to the signs BikeWalkLee and Fiddlesticks Blvd. residents requested to remind drivers that they are required to "share the road" with bicycles? If you'd like to respond to this letter, feel free to e-mail the News-Press mailbag. Thanks. Darla

News-Press Letters to Editor 8/12/10
Bicyclists beware
Florida is one of the worst states for bike/vehicle related accidents, yet we build bike paths on highways.
One morning recently, I passed two bikers on Fiddlesticks Boulevard riding in the middle of the road. Cars were going in the opposite lane to pass these careless people.
Several years ago a friend was struck and killed by a woman in a SUV that simply could not see him. He left a wife, three children and many family and friends. The woman driving the vehicle will live with it for the rest of her life.
We have too many bike paths for them to use. Is it lack of common sense? Selfish people? Stupidity? Lack of concern for drivers?
If my friend were here today, I am sure he would admit to all of the above and he would choose not to ride in the road again. Please be considerate of others.
JOHN FERGUSEN
Fort Myers

Re: “Bicyclists beware,” John Fergusen, Aug. 12. Mr. Fergusen makes an interesting point that two inconsiderate bikers were riding in the middle of the lane on Fiddlesticks Boulevard. Why? Not because they had a death wish but to the contrary: the two cyclists were riding in the road because there is no bike path, no sidewalk and no breakdown lane at all on Fiddlesticks Boulevard.

Bicyclists have a legal right to the roadway. There is even approved national signage that states “Bikes may use full lane” for roads like Fiddlesticks Boulevard, which have zero accommodations for cyclists.

I live off of Fiddlesticks Boulevard and will continue to ride my bike, so, I’m at risk on the road as I bike to the “bike path.” I’m not careless as I ride where the drivers can see me — in the road. I might even be safer if there was signage advising drivers that cyclists were ALLOWED to share the road.