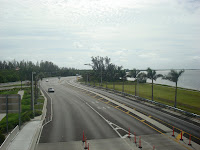 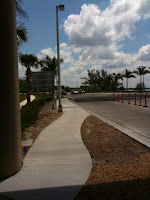 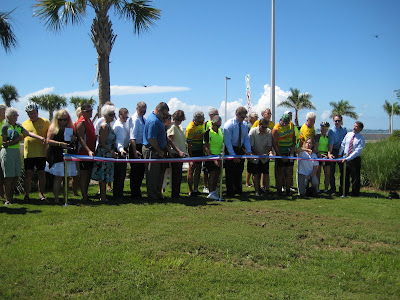 Lee County held a ribbon cutting ceremony today at the base of the Sanibel Causeway to celebrate the completion of improvements made to a bicycle access area near the causeway’s toll plaza.

The $320,000 project, completed in June, created a path from the causeway bike lane through the toll plaza to give bicyclists and pedestrians easier and safer access through the plaza.

“For me, it’s fabulous, because I ride the bridge back and forth a couple times a day,” she said. “With the old way, you got slammed into a concrete wall when you were coming off the bridge, which wasn’t very safe. I truly love the improvements they made, because it is a beautiful bridge to ride over.”

County commissioner Ray Judah was on hand for the ceremony and said he knows from personal experience how potentially dangerous the ride over the causeway was before the improvements.

“Over a year ago, my wife and I took our bicycles and crossed the Sanibel Causeway,” he said. “On our way back, as we were heading for the toll, we realized we had to merge with traffic.” To read the rest of the story, click here.
Wink TV did a nice story on the project early Wednesday morning and mentioned BikeWalkLee, Caloosa Riders, and the Sanibel Bicycle Club. Click here to watch the video.

The Island Reporter's August 26th edition also had a lengthy story about the event and BikeWalkLee's award to Commissioner Judah as Complete Streets Champion of the Year. Click here to read the story.
Posted by Darla at 8/18/2010 04:25:00 PM