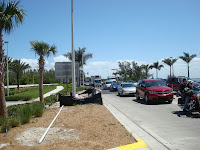 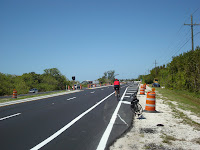 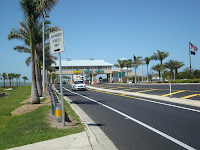 The biking facilities from the corner of McGregor and Summerlin up to the tollbooth to the Sanibel bridges are almost done! First, the roadway on Summerlin was resurfaced with improved shoulders for cyclists, then the Sanibel tollbooth project, funded with stimulus funds, was begun in February. The crews have been working at night for the past 2 months and, according to the LeeDOT project manager, Sarah Clark, the work should be completely finished within 2 weeks. We rode over yesterday and took the above photos. The last photo shows that the section coming through the tollbooth is what remains to be completed. Thanks to everyone at LeeDOT for this major improvement! See you on the Sanibel bridges!