NDN: BikeWalkLee awards "Champion of the Year" while calling for cyclist safety

BikeWalkLee awards Champion of the Year while calling for cyclist safety 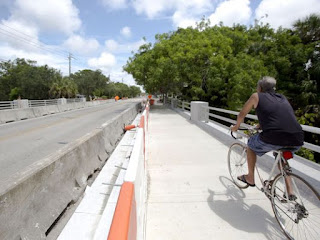 The cyclists of south Lee County are getting a little safer as BikeWalkLee declares it’s Complete Streets Champion of the Year.

Bonita Springs Councilor Peter O’Flinn went above and beyond other area leaders as he helped map future bike trails through the city, the organization said.

“I think the thing is to really become a part of the city’s DNA,” said Darla Letourneau, of BikeWalkLee. “A leader that makes this a top priority and sticks to it and drives it.”

While he’s not alone in the endeavor with the City Council and members of Estero aiming for a better biking experience, O’Flinn is a real driver, Letourneau said.

“Obviously, it’s not done alone,” she said. “The council is helping. But (O’Flinn is) the person who keeps moving it along. We need more Peters around the county.”

Current initiatives include a remake of Terry Street. The roadway is undergoing a major redesign with an emphasis on pedestrians and cyclists — sidewalks will be expanded and more permanent crosswalks will be added.

Planned expansions are also on city, county and state maps, giving the city grant options to kick off construction. One example is a state bike trail running alongside unused railroad tracks.

“It takes 10-20 years to get a Rails-to-Trails project from beginning to end,” she said. “These things take a dedication that most elected officials are looking at the short term.”

Despite the plans in place, current roadways are dangerous for all but the experienced street cyclists, said Doug Saxton of the Estero BikeWalkLee.

“Some people won’t leave their immediate community,” Saxton said. “Just imagine if you could ride with your kids or grandkids to go get an ice cream and it be a safe thing.”
﻿﻿﻿﻿﻿
Dangerous by Design, a group that ranks communities based on pedestrian danger, listed the Cape Coral-Fort Myers area as the worst contender in the nation in 2016. Another report is set to come out in January.

“Pedestrian safety is an indicator of bicycle safety,” Letourneau said. “It’s as if they don’t care. We want to make sure everyone talks about it.”

A new study to be released in January will show whether Lee County has made improvements.
“This has been a bigger issue over the past 10 years — distracted drivers,” Letourneau said.

“We are big champions of walkability to the new (Bonita Springs High School),” said Sarah Baker, chair Bicycle/Pedestrian Safety Advisory Board. “It’s kind of getting in on ground level, integrating it in on paper and then seeing it happen.”

The expansions mostly include shared use paths — in short, a widened sidewalk that both cyclists and pedestrians can use together.

“It’d be nice to have space for the cars, bike lane for the bikes and a shared use path,” he said. “If you’re not comfortable riding next to the road, then don’t.”