Going for the gold

BWL's column this week spotlights both Sanibel's designation as a "Gold" Bicycle Friendly Community, and Bonita Springs Deputy Mayor Peter O'Flinn, who was honored by BWL this week as its 2018 Complete Streets Champion of the Year. It's great to be able to celebrate progress being made towards making our communities more walkable and bikeable...places people want to live, work, and play.
BikeWalkLee Column
The News-Press, December 20, 2018
by Ken Gooderham


Sanibel has long been known locally as setting the gold standard for bike-friendliness. Now the city has an actual gold award to back that up.

Earlier this month, the League of American Bicyclists awarded Sanibel with its Gold level as a Bike Friendly Community, making it only the second community in the state to earn the top award. This comes after the city earned a bronze in 2010, followed by a silver in 2014.

“We invest heavily and systematically into our Shared Use Path system as a city-wide alternative to motorized transportation,” said Sanibel Mayor Kevin Ruane. “We are fortunate to have many partners who support the city’s efforts to focus on the health benefits and safety of biking on Sanibel. To have our collective efforts recognized nationally as one of the nation’s premier programs is a source of community pride for Sanibel.”

Among the elements that earned the city this higher status: 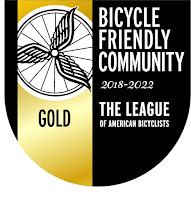 The Bike Friendly America program run by the League offers communities a roadmap to improvements that make cycling more accessible and safer based on five “building blocks”: Enforcement, education, engineering, evaluation and encouragement.

Cape Coral and Naples have earned the bronze level in bike friendliness from the League. We hope both communities follow Sanibel’s lead and keep working to move up the ladder – and that other communities (and businesses and institutions) in our region opt to apply to see if they can improve (or even just prove) their bike friendliness.

Speaking of awards, BikeWalkLee recently honored Bonita Springs Deputy Mayor Peter O’Flinn as its 2018 Complete Streets Champion of the Year for his outstanding leadership, vision, and commitment to bringing complete streets concepts to reality on the ground in Bonita Springs.


“Deputy Mayor O’Flinn is a tireless leader who is focused on bringing that vision to reality one project at a time, each building on the other attracting grant funds, and gaining state and national recognition,” said BikeWalkLee’s Darla Letourneau.


Bonita Springs is a shining example of a community making a paradigm shift into a new way of thinking and doing business. The city has taken the complete streets approach and, through collaborations and partnerships, adapted and built on the foundation put in place over the past decade.

Prior to joining the Bonita Springs City Council in 2016, O’Flinn was an engaged community leader, advocating for enhancing the quality of life in Bonita through a complete streets approach.

Once on the council, he made complete streets one of his top priorities. He has provided visionary leadership on the council, throughout the community and countywide. His goal has been to consistently advance these concepts and help educate the public about its benefits.

“Thanks to Deputy Mayor O’Flinn’s efforts, the citizens of Bonita Springs will have safer streets, a community with more options for getting around town, a trail that will serve present and future Bonitans for generations, and a burnished reputation as a great place to live, work, and play,” said Letourneau.

Ready to ride or run?

Run? Running races take a break for the holidays, with the exception of the Marco 5 Mile Hill Run this Saturday (Dec. 22 – details at gcrunner.org). Keep on training, though, as the events come back strong in the new year.

Ride? Tomorrow night is the month NE Lee Critical mass ride, followed on Dec. 28 with the Cape night ride and the Dec. 29 downtown Fort Myers Slow Roll. Front and rear bike lights required for the night rides, so grab your helmet, bring all your friends. The regular Sunday morning rides continue as well; details on all at meetup.com.

Both? Upcoming events include:

TELL US ABOUT YOUR RIDE:

Have a favorite route you like to bike, or a unique walk you’d like to share with others? Tell us about it at info@bikewalklee.org, and maybe we can feature it in an upcoming column.


Ken Gooderham writes this on behalf of BikeWalkLee, a community coalition raising public awareness and advocating for complete streets in Lee County — streets that are designed, built, operated and maintained for safe and convenient travel for all users: pedestrians, bicyclists, motorists, and transit riders of all ages and abilities. Information, statistics and background online at www.BikeWalkLee.org.